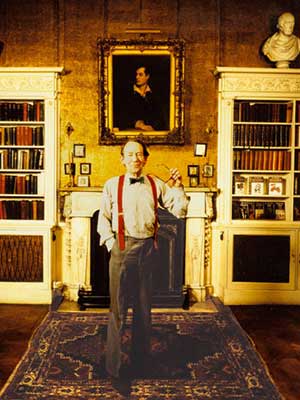 John Murray VI — or 'Jock', as he was affectionately known — was the nephew of John Murray V.

Born John Arnaud Robin Grey, from an early age Jock was expected to enter the family firm. He was educated at Oxford University, where in 1928 he met poet John Betjeman and cartoonist and designer Osbert Lancaster. Both became lifelong friends, as well as Murray authors.

Education, science, and the Byron papers

At this point in the firm's history, there was also a dramatic growth in educational and scientific titles. Some of these — such as D G McKean's 'O-level Introduction to Biology' — were hugely successful, selling millions of copies. Murray's educational titles were developed under Kenneth Pinnock.

Jock was also a knowledgeable, respected and obsessive Lord Byron scholar and collector. He added to the Byron papers within the John Murray Archive.

He also helped with and published numerous works on Byron, including Leslie Marchand's 13 volume edition of Byron's letters and journals (1973-1994).

Jock was active in a number of societies and associations, among them the Royal Geographical Society, the Publishers' Association, the Literary Society, the Society of Dilettanti, and the Roxburghe Club.

In 1945 he was made an MBE for his war service, and in 1975 he was appointed a CBE for services to literature. He was active in the company until his death in 1993.