The European Union referendum 2016 collection at the National Library of Scotland is a growing resource.

We are collecting an unbiased and inclusive representation of items produced as part of the United Kingdom's 2016 EU referendum and as part of Brexit. Collection began before the 23 June 2016 referendum, and the collection continues to grow.

Our collections are rich in this area, not least because of our official publications content, which includes the publications of EU bodies. We also have vast collections of publications about Europe and topics around international relations.

Introduction to the EU referendum 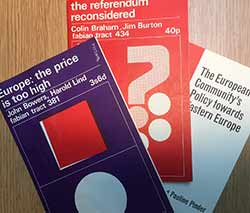 Books about the
EU from our collections.

On 23 June 2016, eligible voters could vote on Britain's continued membership of the European Union.

This simple question drew together a complex range of topics. The debate about British identity within Europe is happening at a time when existing global economic models and international relations are also in flux.

In addition to these geopolitical issues, this question also speaks to equally complicated issues such as national identity and national self-perception, which can be seen through historical, cultural, and other lenses.

After the referendum — Brexit

The UK voted to leave the European Union, with 52% voting 'leave' and 48% 'remain'. Brexit became an abbreviated way of describing Britain's exit from the EU.

Nine months after the vote, on 29 March 2017 Prime Minister Theresa May initiated the process of Brexit by triggering Article 50 of the Lisbon Treaty. Following the activation of this mechanism, the Great Repeal Bill was introduced by the UK for scrutiny by Parliament. The purpose of this bill is to revoke the 1972 European Communities Act. Under Article 50 the time frame allowed for departure of a country from the EU is two years, meaning that the UK is scheduled to leave the EU on Friday 29 March 2019. Following this date, the UK will enter a transition period during which new UK-EU relations will be established.

The EU and the referendum are complex topics with much history. We have suggested six areas to begin research or learn more:

In Library Search you can find records for EU and referendum-related publications.

Because of the scale of the topic, you could find publications using the 'subject search' option in Library Search. In the 'Advanced Search', change the 'Search Scope' to 'Library collections', then select 'Subject' instead of the default 'Any field' from the drop down box. Useful subject search terms include:

When you register with the Library, you have free online access to an extensive range of eResources (formerly called licensed digital collections).

Three of our eResources contain journal article content about the EU and the referendum:

Help us collect the referendum

We are looking for your help to collect items related to June's referendum, including:

We can only collect what we know about, so your information now could make a real difference to our collections. After the referendum, much of this material might be thrown out or deleted, making it too late to save.

To find out more about helping to build our EU referendum collections, or to discover more about our existing collections, contact Jennifer Giles, Scottish Communities and Organisations Curator: j.giles@nls.uk