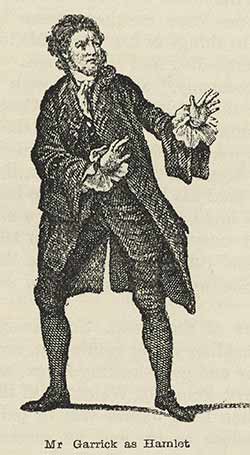 'Mr Garrick as Hamlet', from 'Their Majesties servants: Annals of the English stage' by John Doran and Robert Lowe, 1897. [Library shelfmark: NF.1478.b.2]

During his long career, he adapted and starred in many Shakespeare plays, including Macbeth, Hamlet, King Lear and Benedick.

In 1769, Garrick staged the Shakespeare Jubilee in Stratford-upon-Avon, celebrating 200 years since the playwright's birth. The event helped to cement William Shakespeare as England's national poet.

This image of David Garrick featured in our display, 'Playing Shakespeare: 400 years of great acting', at the Library from 17 March until 12 June 2016.