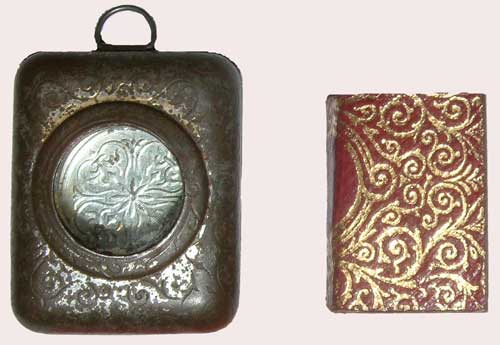 The production of miniature Qur'ans in manuscript has a long tradition, but the printing of them in this form had to await the arrival of photolithography in the late 19th century.

Tiny Qur'ans were published in Delhi in 1892 and Istanbul around 1899, but the one which achieved the widest circulation is the edition by David Bryce.

All the copies were issued with metal lockets which incorporated a magnifying glass and many were supplied to Muslim soldiers fighting for the British in the First World War.

It was in this last context that the little book was mentioned by T E Lawrence:

'[Auda] told me later in strict confidence that he had bought a miniature Qur'an for one hundred and twenty pounds, thirteen years before, and had not since been wounded … The book was one of the little Glasgow reproductions, costing eighteen pence in England, but the Arabs were too afraid of Auda's deadliness to laugh at his superstition … or to explain to him his bad bargain.' ('Seven Pillars of Wisdom', book 4, chapter 57).

This item featured in our miniature books display at the National Library of Scotland from 18 15 September to 17 November 2013.