The two smallest books in the National Library 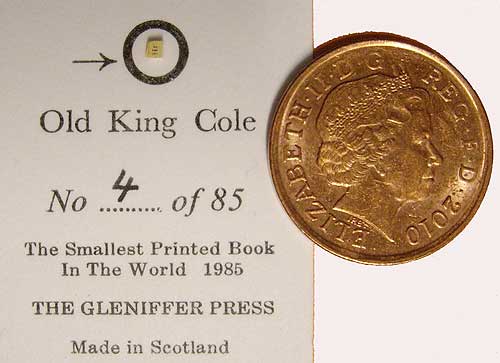 'Old King Cole' issued by the Gleniffer Press is a record breaking book.

Measuring only 0.9mm in height, it was verified by the 'Guinness Book of Records' as the smallest book in the world printed using offset lithography. It held this title for 20 years.

The 12 single-sided pages of the nursery rhyme 'Old King Cole' were printed on the finest 22gsm English paper.

At only 2.1mm in height, the Gleniffer Press's 1978 edition of 'Three blind mice' is still the tiniest book ever printed by letterpress — the traditional method of printing since the 15th century.

The nursery rhyme was set by hand using filed-down four-point Boxhead Gothic type. The 15 pages of text were printed on pages of fine white paper which had been cut to size with a scalpel.

Dental tweezers were used to glue the eight leaves, one at a time, to the case.

These items featured in our miniature books display at the National Library of Scotland from 18 September to 17 November.