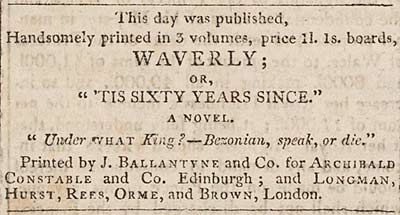 These advertisements from 1814 show how Walter Scott's novel 'Waverley' was promoted in newspapers and magazines as it neared publication and on the day it was published.

It is interesting to note that the title is spelled 'Waverly', although Scott consistently used 'Waverley'. His printer, James Ballantyne, used both spellings in his letters to the author.

On 27 January, the advert announced:

'In the press, and speedily will be published, in three volumes, Waverly; or "'Tis sixty years since." A novel. Printed for J Ballantyne and co for Archibald Constable and Co, Edinburgh; and Longman, Hurst, Rees, Orme, and Brown, London.'

The advert on 7 July reads:

'This day was published, handsomely printed in 3 volumes, price £1 1s boards, Waverly; or, "'Tis sixy years since." A novel. "Under what king? — Bezonian, speak, or die." Printed by J Ballantyne and co for Archibald Constable and Co, Edinburgh; and Longman, Hurst, Rees, Orme, and Brown, London.'

These adverts featured in the display about Walter Scott's 'Waverley' at the National Library of Scotland from 10 September to 16 November 2014.