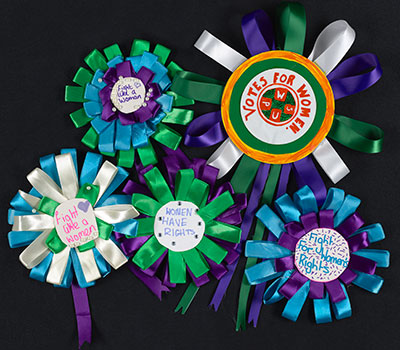 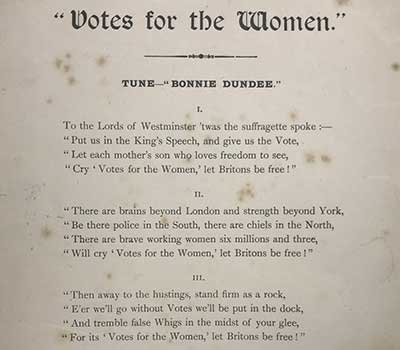 Detail from a song sheet, circa 1910.
from the Library's collections.

In the decades preceeding the war, the campaign for women's right to vote grew in prominence. To promote their cause, suffragists wore coloured rosettes and sashes, circulated publications and pamphlets, and sang songs to protest and lobby the government for change.

Inspired by the efforts and bravery of the Scottish suffragists, groups of young people from Dumfries and Galloway and Stirling created modern versions of the traditional suffagist rosettes. Retaining some of the symbolic purple and green colours of the women's movement, the groups' rosettes were embellished with gems and pearls and carried powerful slogans such as 'Fight like a woman' and 'Women have rights'.

Many items of suffragist propaganda can be found in the Library's collections. One songsheet, entitled 'Votes for the women' dates from around 1910 is held in the Library collections (shelfmark: APS.2.87.19). It includes a poem adapted from Walter Scott, to be sung to the tune of 'Bonnie Dundee'. The first verse contains the lines:

'To the Lords of Westminster 'twas the suffragette spoke: -'
'Put us in the King's Speech and give us the Vote,'
'Let each mother's son who loves freedom to see',
'Cry 'Votes for the Women', let Britons be free!'