In October 2021, the National Library of Scotland launched an appeal to repatriate some of Scotland's most important literary manuscripts.

The Honresfield Library is a tremendous collection almost entirely inaccessible since the 1930s. Its appearance on the open market attracted the interest of a community of libraries, archives, and cultural heritage institutions across the UK. We launched a campaign to prevent this unparalleled collection of literary treasures being broken up, going overseas or going back into private hands.

Among the 500 manuscripts in this collection are items of great significance to Scotland. Robert Burns's handwritten letters to his family, lovers and patrons sit alongside discussions of his work penned by Byron, and novel fragments and travel journals written by Sir Walter Scott.

Two star items bring the importance of this collection to Scotland into sharp focus. 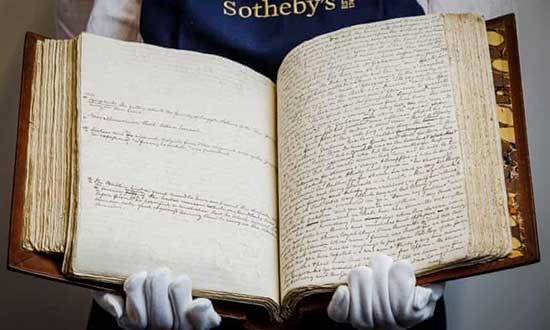 The first, a 'Commonplace Book' compiled by Robert Burns between 1783-85 — when the Bard was yet to publish his work or achieve fame — contains his earliest surviving poems, notes and ideas.

The second is the working manuscript of the great novel 'Rob Roy'. Written in Sir Walter Scott's own hand, it is the only manuscript novel of his to remain in private hands.

These are lynchpins of Scottish literature, yet were at risk of being separated, dispersed and lost from public ownership.

An opportunity to safeguard the collection

Having been privately owned since the late 19th century, these manuscripts were being sold at auction. As a member of a special consortium coordinated by the Friends of the National Libraries, we successfully delayed the auction. £15 million was needed to save this material for the nation. The value of the 40 'Scottish items' in the collection is £2.75 million.

We could not let items of such cultural and historical value go abroad or into private hands. They should, and must, be added to the national, public collection.

The National Library of Scotland worked with the other Scottish members of the consortium — Abbotsford and the National Trust for Scotland — to raise the money needed to bring these giants of Scottish literature home.

We are grateful to the Friends of the National Libraries who coordinated the Honresfield campaign, and to the lead donors to this national campaign, Sir Leonard Blavatnik and the National Heritage Memorial Fund.

The following generously donated to the National Library of Scotland's 'Bring the Bards Home' campaign. We extend sincere thanks to you all, and to the donors who prefer to remain anonymous.

A J Baker of Comrie

Support the National Library of Scotland