Book of the Dean of Lismore

The Book of the Dean of Lismore is one of the greatest treasures among the National Library of Scotland's early Gaelic collections.

It is a compilation of poetry made by James MacGregor (circa 1480-1551), Dean of Lismore and notary public working in Fortingall, Perthshire. The volume contains mostly Gaelic poetry, besides some miscellaneous items in Scots, Latin and English.

The poems are said to have been taken down from the repertoire of 'strolling bards', and are now a main source for early Gaelic poetry. The page shown here is from a religious poem on the Virgin Mary and the infancy of Christ.

The Gaelic texts are not written in the Gaelic hand and spelling that was common at the time. Instead, both orthography and handwriting are based on 16th-century Scots writing, which adds a special linguistic interest to the volume. It allows us an insight into the writer's own regional Perthshire pronunciation, which would normally have been hidden behind the classical Gaelic spelling.

The manuscript is housed in a safe and subject to special conditions of access. Contact Manuscripts Collections for further information. 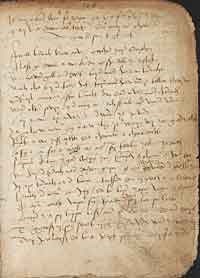