Putting Scotland on the map

The world of John Bartholomew & Son 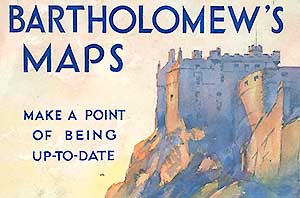 'Putting Scotland on the map' told the story of one of Scotland's most influential mapmaking firms, John Bartholomew & Son.

Bartholomew produced well-loved maps for every occasion, and in the process changed the face of Scottish mapmaking forever.

How maps were produced

This exhibition brought Bartholomew's Duncan Street premises in Edinburgh back to life as we explored how the firm produced its world-famous maps.

Behind the Duncan Street doors, hand-drawn maps were turned into back-to-front copperplates by engravers before heading to the printing room floor.

Exhibition visitors had the chance to meet some of the most influential characters from the Bartholomew family. They also saw evidence of the skill and talent of the craftsmen and women who produced Bartholomew's remarkable maps.

We told the story of the firm through a rich array of items including manuscript maps, printed maps and atlases, photographs, oral history recordings and hand-made tools.

This exhibition drew almost entirely on material from the Bartholomew Archive, which records almost 200 years of the development of the firm, from 1820-2001. It is an incredibly rich resource which allows us to study the firm in extraordinary and intimate detail.

Some of the key treasures that visitors saw included:

Interaction with the exhibition

Visitors could experience what it was like to be a Bartholomew employee as they: