A selection of delightful early editions of 'Alice's adventures in Wonderland' featured in the display.

Written by Charles Lutwidge Dodgson under the pseudonym 'Lewis Carroll', this children's classic was published in 1865 and featured illustrations by John Tenniel.

Our display included a rare first issue of the first edition, alongside letters from the author, and other much-loved Lewis Carroll works.

Coinciding with Scottish Ballet's production of 'Alice', the display was accompanied by original costume and set visuals and a behind-the-scenes film montage from the production. Visitors could also enter our competition to win tickets to see Scottish Ballet's 'Alice' at the Festival Theatre, Edinburgh (20-23 April).

The origin of the story 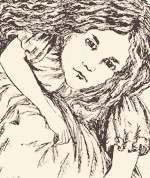 Charles Lutwidge Dodgson was a mathematical lecturer at Christ Church College, Oxford. He invented the tale of Alice's adventures in Wonderland for Lorina, Alice and Edith Liddell, while taking them on a boating trip in 1862. The children were the daughters of Henry Liddell, Dean of Christ Church.

At young Alice Liddell's request, Dodgson wrote down an early version of the story, 'Alice's adventures under ground', accompanied by his own illustrations.

'Alice's adventures in Wonderland' is published 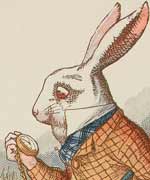 The White Rabbit
checks his watch

'Alice's adventures in Wonderland' was published in 1865 by Macmillan and Co, and was printed by the Clarendon Press, Oxford, in a print run of 2000 copies. The famous artist John Tenniel supplied the illustrations, engraved by the Dalziel Brothers.

Only a small number of copies had been bound when Dodgson received a complaint from Tenniel about the quality of the printing.

The author subsequently withdrew the first issue and asked recipients of presentation copies to return them. Returned copies were donated to children's hospitals or given away for the use of sick children. (The remaining unbound sheets were later sold to a New York publisher and issued with a new 1866 title-page.)

A new printer, Richard Clay, was employed to reset and print the second edition, as a replacement.

Sales of 'Alice's adventures in Wonderland' rose steadily and the first German and French translations appeared in 1869.

A sequel, 'Through the looking-glass, and what Alice found there', followed in late 1871 with fine illustrations supplied again by Tenniel.

It was the first version of the story to appear in colour, and was engraved and printed by the leading Victorian colour printer Edmund Evans. 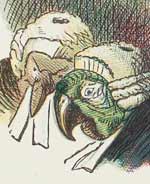 Alice with the jury 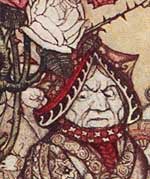 The Queen of Hearts,
by Arthur Rackham 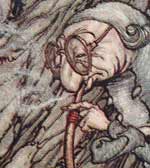 Alice and the
caterpillar, by
Rackham

In 1907, 42 years after its first publication, Macmillan's exclusive copyright of 'Alice's adventures in Wonderland' ended in Britain. A host of publishers issued the work with new illustrations.

Arthur Rackham, Alice Ross, Charles Robinson and Gwynedd M Hudson are just some of the illustrators whose work featured in our display.

First issue of the first edition on display

Treasures on display included a rare first issue from the first edition of 'Alice's adventures in Wonderland'. Few copies of the first issue have survived, and the National Library of Scotland's copy, from the Hugh Sharp Collection, is bound in the original red cloth.

Among other exhibits were: