The art and history of 'The Dandy'

The world of Desperate Dan, Beryl the Peril, Korky the Cat and others featured in our display on a favourite British comic. Ran from 21 November 2012 to 3 February 2013. 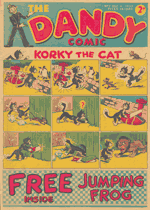 Launched in 1937 by publishers D C Thomson, 'The Dandy' is Britain's longest-running comic.

For 75 years it has served up weekly portions of boisterous fun designed to tickle the funny bones of kinds of all ages.

This display features original drawings and artboards from D C Thomson's archives, as well as copies of 'The Dandy' annuals from the National Library of Scotland's collections.

With iconic characters like Korky the Cat and Desperate Dan, 'The Dandy' is a beloved part of British childhood.

It was launched on 4 December 1937 — six months ahead of its sister comic, 'The Beano' — priced at 2d for 28 pages. Inside was a free gift — the Express Whistler. 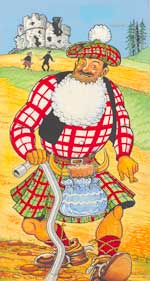 By the 1950s, 'The Dandy' was Britain's largest-selling comic with a circulation of around two million copies per week.

Though 'The Dandy' was D C Thomson's first weekly comic, its artists and scriptwriters were far from newcomers to the field of comic art. Many of them already worked for other Thomson publications.

Together they created a world of madcap mayhem and anarchic fun, populated with a host of iconic characters — like Desperate Dan, who became the comic's biggest star.