The John Murray Archive contains fascinating information about the creation of some of the most popular and important works in British literature.

The house of John Murray published poetry, novels, scientific, religious and political works, travel writing, biography, periodicals, and educational titles, and continues to publish books today, although it is no longer a family firm. Its authors included:

In purchasing the firm of Smith Elder & Co they also acquired a wide range of other famous names including: 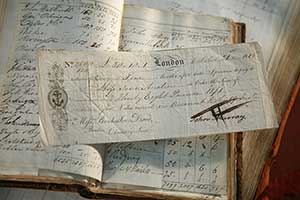 A John Murray ledger and a cheque payable
to Jane Austen. 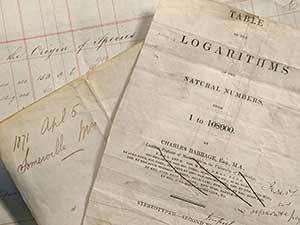 Science is well represented in the Murray
Archive.

The archive contains the business papers of the publishing firm John Murray from the 18th to the 20th century.

Through business ledgers and correspondence researchers can explore how books are made by authors, publishers and printers, and find out which books were bestsellers and which were unpopular with the reading public.

Each generation of the Murray family shaped the firm's publishing activities in a new way.

This is reflected in the correspondence with authors and other publishers, and its business ledgers recording information about printing and selling books.

The archive also contains the largest collections of papers relating to the Romantic poet Lord George Gordon Byron (1788-1824) collected together and preserved by the Murray family.

Edinburgh to London and back again

It all began in Edinburgh where the first John Murray was born in 1737.

Murray moved to London to set up as a bookseller in 1768 — first in Fleet Street and later in Albemarle Street.

However, the family's social and business connections with Scotland continued, as Edinburgh was an important centre of the British book trade.

The archive at the Library

The first part of the archive came to the National Library of Scotland in Edinburgh in 2006, and we have subsequently received further material relating to Murray publishing in the 20th century.

Much of the archive collection is listed on our main catalogue, but if you cannot locate what you are looking for please contact manuscripts@nls.uk.

The 1933 travel journal written by Patrick Leigh Fermor in Europe