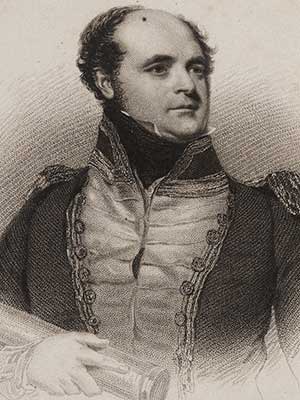 In the early 19th century, Sir John Franklin was considered a national hero for his attempts to find the sea route known as the 'North West Passage'.

His first expedition was overland in co-ordination with a naval expedition commanded by William Edward Parry.

Due to misfortunes and a lack of supplies, the expedition failed, with only 11 of Franklin's 20 men surviving.

In addition to the usual business records and correspondence, the John Murray Archive also contains Franklin's notebook written at Fort Enterprize in 1821.

Franklin's next expedition produced 'Narrative of a Second Expedition to the Shores of the Polar Sea, 1825, 1826, and 1827' (1828). He was praised for his successes and received many honours, including a knighthood in 1829.

In 1845 he was invited to lead another Arctic expedition. This ended in complete failure and claimed the lives of the entire party.

Between 1847 and 1859 some 30 expeditions were sent to discover the expedition's fate.

Franklin's wife, Lady Jane Franklin, was a key campaigner in discovering the fate of her husband's party.