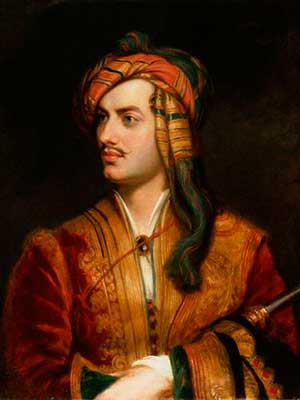 Lord Byron is one of the most influential and celebrated of the poets of the Romantic era.

His lover, Lady Caroline Lamb, famously described him as 'mad, bad, and dangerous to know'. Notoriety and debt pushed him into a self-imposed exile on the continent. He never returned to Britain, dying in Greece, where he had gone to support the struggle for Greek independence.

As well as being a talented poet, he is considered one of the greatest letter writers. These letters reveal in detail his notorious life which was full of travel, writing, extravagant spending, debts, love affairs and scandal.

John Murray II was Byron's friend, publisher, literary critic and adviser. With the exception of his early poetry — 'Hours of Idleness' and 'English Bards and Scotch Reviewers' — and his final works, the house of Murray published all of Lord Byron's works until 1822.

Byron fell out with Murray in 1822 after Murray refused to publish cantos IV-IX of 'Don Juan'.

For generations the Murray family built up a large and important collection of Byron papers, which is now part of the John Murray Archive at the National Library of Scotland.

Sketch of Lord and
Lady Byron