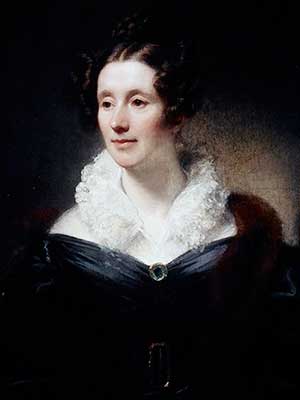 Mary Somerville was one of the great popular science and mathematics writers of the 19th century.

She was one of the first women to become an honorary member of The Royal Astronomical Society and Somerville College at Oxford University was named in her honour.

These achievements are even more remarkable as she had, as a child, limited formal education.

Her father did not approve of her being educated and banned her from using their stock of candles to read mathematical works in bed, but she taught herself algebra and geometry and became interested in a wide range of scientific fields.

Although Somerville herself carried out scientific experiments, Murray recognised that her skill as an author was to be able to explain varied and complex areas of scientific knowledge to a general audience.

For example, in 'On the Connexion of the Physical Sciences' (1834) she summarised the latest research in astronomy, physics, chemistry, botany, and geology.

Even into old age Somerville retained a sharp mind and keen interest in scientific developments.

She knew the great scientists of her time and corresponded with many of them. When she died in 1872 she was declared by 'The Morning Post' as 'the Queen of science'.