Main OS map series that can be copied

The National Library of Scotland is an Ordnance Survey Licensed Partner, so we can supply copies of all in-copyright superseded OS maps in our collections for commercial use.

From the 1970s, OS maps on microfilm (SIM) were often issued instead of paper sheets and we can copy these too. No paper sheets or microfilm were published after 1999 at scales larger than 1:10,000.

There are separate arrangements for consulting or obtaining printouts of OS digital data since 1998 for private or non-commercial use only. 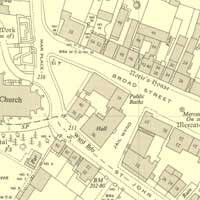 Summary: The most detailed OS post-war series, covering all urban areas with more than about 20,000 inhabitants. Black printed detail, no colour.

Revision: Continuously revised. New paper sheets produced after 300 house units (see note) of change, new Survey Information on Microfilm (SIM) produced after 50 house units of change. After 1973, urban areas with 1:1,250 scale maps did not have 1:2,500 maps published for them, so only the 1:1,250 scale provides complete coverage through time. Our OS sheet records viewer provides details of all dates of sheet maps published on paper for Scotland.

Sheet size for copying: A1 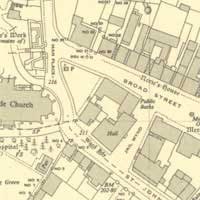 Summary: The most detailed OS series for all inhabited areas and cultivated land. Originally begun in 1855 as the 25" to the mile scale. Black printed detail, no colour.

Detail shown: 1cm on the map represents 25 metres on the ground (one square inch roughly equals one acre on the ground). All permanent objects covering 16m² as well as most detached features covering 2 sq m are shown. Shows divisions between houses, house numbers, public and industrial buildings, railways, roads, parkland, paths, field numbers and acreages, land-use and trees, spot heights, place names and all administrative urban and rural boundaries. A standard topographical authority showing all significant man-made and natural features to scale (i.e. without generalisation and reduction of detail)

Note: House-unit — The method of quantifying change used by the OS whereby the addition of a complete, independent building to the map counted as a 'house unit'. Large buildings could count as 10-20 units per hectare, motorways and railways as 5-10 units per 100m, power lines as 2 units per 100m, altered names of roads as 1 unit, etc.

Sheet size for copying: A1 (single km. square) or A0 (double km square) 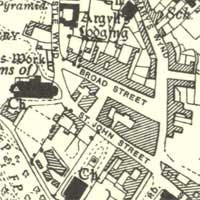 Summary: A standard topographical authority for many purposes and especially useful for rural areas. The most detailed OS series covering the whole of Great Britain. For moorland and mountainous areas, the most detailed OS series (basic scale) but still useful for an overview of more settled and urban areas, where information is derived from the more detailed 1:2,500 and 1:1,250 scales. Originally began in 1843 as the 6" to the mile scale. The 6" scale is 1:10,560. From 1970 it was metricated and published at 1:10,000. Black printed detail, no colour.

Detail shown: 1mm on the map represents 10m on the ground, so there is considerable generalisation of features such as buildings, streets and railways that are not shown in plan form. Shows houses blocked together, public and industrial buildings, railways, roads, field boundaries, land-use and trees, contours and spot heights, place names and all administrative rural boundaries. The 1:10,560 is the most detailed / largest scale OS map to show contours (lines of equal height).

Revision: The series was published for all of Great Britain between the 1940s and the 1970s. There are often two to four editions of mapping for areas undergoing more significant change, but only one edition for sparsely populated rural areas.

Sheet size for copying: A1

The following smaller-scale series are covered in less detail, as they show generalised information from a range of earlier dates, and are not based on a clearly defined date of survey or revision. We also have no sheet lines available for these series in the National Grid viewer.

Summary: A useful scale for rural land use, recreation, rights-of-way, woodland history and rural place names. These series are all useful for showing rural and urban areas in greater details than the standard 1" to the mile (1:63,360) maps.  Originally printed using four colours with modifications in later editions. View the 1:25,000 Provisional Series.

Details shown: 1mm on the map is equal to 25m on the ground, so considerably generalised information. Within settlements, the general character of buildings, whether terraces, semi-detached or large detached houses, etc., can be shown and public buildings are distinguished by their darker shading. Within rural areas, useful for showing field boundaries, footpaths, tracks and bridleways. Different types of woodland (coniferous, deciduous or mixed woodland) are indicated and features of archaeological interest including cairns, earthworks, historic routeways and standing stones are shown. Roads and railways are depicted with less generalisation than at smaller scales and contour lines are shown at close intervals of every 25ft (later 10m). Includes national, country, burgh and civil parish boundaries.

Revision: By 1956 the series covered 80% of Great Britain, excluding the Scottish Highlands and Islands. More settled areas were revised more frequently. Consult 'A Guide to the Ordnance Survey 1:25,000 First Series' by Roger Hellyer (London:  Charles Close Society, 2003) for details of each sheet.

From 1965 the 1:25,000 series was issued in a standard 20 x 10km size in what became known as the 'Second Series' and from 1979 as the 'Pathfinder Series'.  From 1972 even larger sheets at 1:25,000 were issued for popular walking areas and National Parks, known as the 'Outdoor Leisure' series. From 1994 these were complemented by the 'Explorer' series for all other areas.

Summary: A general touring, cycling or reconnaissance map, showing the main features of the landscape in a generalised form. Originally printed using six colours with modifications in later editions.

Details shown: 1mm on the map is equal to 50m on the ground so the landscape is considerably simplified. Smaller features are excluded and certain features such as roads are substantially enlarged. Printed in six colours, contours at 50ft or 10m. Always useful for walkers with rights-of-way, paths, bridleways and youth hostels indicated and the quantity of recreational and tourist information has steadily grown. Built up areas are generalised together but public buildings are distinguished by standard symbols. Different types of woodland (coniferous, deciduous or mixed woodland) are indicated on the Landranger series with other symbols for rough grassland/dunes and water features. National, county and civil parish boundaries are shown.

Revision: Cyclic revision at periods between seven and 25 years depending on the area. The First Series of the 1:50,000 (1974-) was based on an enlargement of the 1" seventh series (1952-1961) on new sheetlines but the Second Series (1974-) was completely redesigned and redrawn. In 1979 the 1:50,000 was named the 'Landranger' and completed coverage of Great Britain in 1987. Further information is available from the Ordnance Survey.

Sheet size for copying: A0

Further information on these and other map series

The above descriptions of series are necessarily brief and exclude a range of other information about these and other map series. For further information, please consult:

How to order copies