The Library is the main repository for Scottish newspapers. It acquires through copyright privilege a copy of every newspaper, whether daily or weekly, published in Scotland.

For older newspapers the coverage is somewhat uneven. During the 19th century, at a time when the provincial press was growing rapidly, the Advocates Library — the National Library's predecessor — did not have the room to store newspapers and did not collect newspapers, although they were entitled to do so. There are considerable gaps in our collections both for national and provincial titles, but the British Library claimed a copy of Scottish newspapers until the early 1950s.

The antecedents of newspapers were news-sheets which were small booklets of between two and 16 pages made from a single sheet of paper. One of the first was 'The heads of severall proceedings in the present Parliament'(shelfmark: F.7.d.33) (Edinburgh, 1641) which reprinted news on parliamentary debates from London. 'Mercurius Caledonius' (H.1.e.26) which appeared briefly in 1660 and 1661 was arguably the first Scottish newspaper. It was not merely a reprint of London papers, but contained domestic news such as reports of parliamentary debates, as well as reports from abroad.

Masthead on the last issue
of the 'Caledonian Mercury'
Larger 1867 page image.

Newspapers became more established during the early 18th century and Edinburgh was the main centre for their production and consumption.

In Glasgow, the 'Herald's' predecessor, the 'Glasgow Advertiser', first hit the streets in 1783, while 'Aberdeen's Journal', the antecedent of today's 'Press and Journal', was first published in 1748. The Library's holdings for these early titles are comprehensive, though by no means complete. 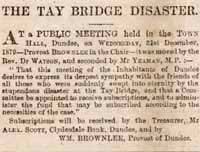 During this time, and for much of the 19th century, newspapers had a low circulation — the circulation of the 'Scotsman' in 1817 was a mere 300. They were competing to a great extent with the far more popular and cheaper broadsides.

It is worth noting that the early publishers of the Falkirk and Stirling titles also published chapbooks. Like broadsides, chapbooks were a popular form of street literature, gradually to be eclipsed by the newspapers, cheap periodicals and 'penny dreadfuls'.

When viewing records for newspapers it is important to scroll to the bottom of the screen to see which issues the Library holds.

NLS is playing a leading role in the preservation of Scotland's newspapers through NEWSPLAN Scotland. We have bought a microfilm copy of all Scottish newspaper titles filmed, making our newspaper collections comprehensive. For further information, see the NEWSPLAN Scotland section.