The rise of literacy in Scotland

The written word has always helped to shape cultures and societies but for centuries most people could not read.

Many collections in the National Library of Scotland shed light on the rise of literacy in Scotland from the earliest manuscripts to the foundation of compulsory education.

From manuscript to print 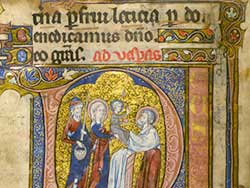 In the Middle Ages, literacy was mostly limited to the wealthy and powerful in schools run by monasteries in larger towns and cities. The Church produced and commissioned many manuscripts — the only form of the book before the invention of printing.

As manuscripts were written and illuminated by hand they were expensive and not widely accessible.

By the 15th century, grammar schools and universities began to spread literacy beyond the clergy, and surviving manuscripts by laymen show literacy in other professions.

Among our manuscript highlights at the Library are: 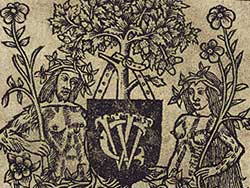 View 'The Complaint of the
Black Knight' 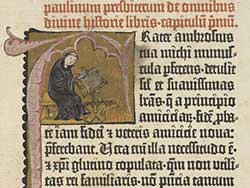 The invention of the printing press in 1439 by Johnnes Gutenberg made books cheaper and more accessible and caused a surge in literacy across Europe.

Printing in Scotland began on 4 April 1503 with Walter Chepman and Andro Miller's 'The Complaint of the Black Knight',
printed in 1508. 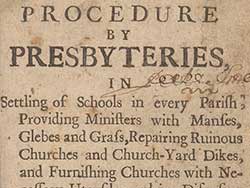 John Knox's 'First Book of Discipline' (1560) called for a school in every parish.

Education Acts in 1616, 1633 and 1696 tried to establish schools, but in many areas parents could not afford fees it and was difficult to hire authorised teachers.

For the Church of Scotland, literacy was about creating a 'godly' society, not a literate society.

Reading was taught using religious texts like catechisms and illustrated Bibles which simplified the liturgy.

From 17th to the 19th centuries most reading material for the general public was 'street literature' such as broadsides, which were single sheets, and chapbooks.

They were cheaply produced, widely available, often found in public places and covered many subjects, including:

As literacy spread, especially in towns, demand for street literature increased — though many people would have heard the texts sung or read aloud.

On the other hand the volume of chapbooks and broadsides available probably helped to improve basic literacy in the general population. 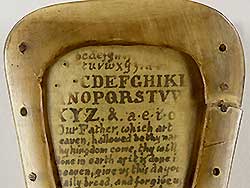 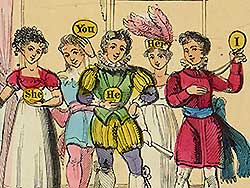 In the 19th century the Church's role declined due to industrialisation, urbanisation and the creation of the Free Church of Scotland (1843). The State took more control of education, establishing free state-funded schools for children aged 5-13 in 1872,.

Machine printers developed during the Industrial Revolution allowed more complex material to be published cheaply and in large batches. 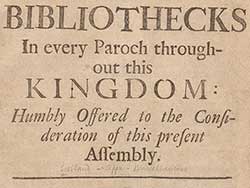 Before the 18th century libraries were usually attached to churches and universities or owned by wealthy individuals. The National Library's original collections were owned by the private Faculty of Advocates.

As literacy rose in the general population, so did the demand for access to books. Circulating and subscription libraries became popular and provided cheaper access to books on many subjects.

By 1850 there were libraries in most burghs of Scotland. 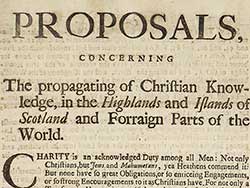 Literacy in Scotland until the 20th century often meant literacy in English — the language of government and trade.

Scots was seen as 'incorrect' English, and Gaelic was suppressed.

Literacy in the Gaelic-speaking communities of the Highlands and Islands was low, and the area was seen as rebellious and uncivilised by the English and Lowland Scots.

Schools were under-funded and lacked good teachers. Those run by the Society in Scotland for Propagating Christian Knowledge (SSPCK), which was founded in 1709, punished children for speaking Gaelic.

In the 1760s the SSPCK began to print Gaelic translations like the Mother's Catechism and the New Testament but these were only designed to help children learn to read English.

By the 19th century support for Gaelic was growing, but it was only towards the end of the 20th century that schools teaching in Gaelic were finally established.

Rising Scottish literacy was part of a much wider trend in Europe. The Scottish Enlightenment shared rational, humanist ideals with the continental movement and was built on the Lowland network of parish schools and the four universities.

Scottish influence on economics, philosophy, science and literature were carried all over Europe through correspondence and translated texts. 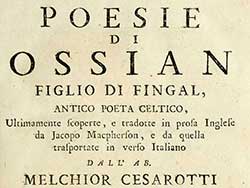 Scots played a key role in the Romantic Movement that swept Europe in opposition to the strict rationality of the Enlightenment.

It helped to spark the revival of vernacular languages such as Gaelic and Scots, though this was usually limited to poetry and songs.

James Macpherson's 'The Poems of Ossian', first published in 1761, claimed to be translations of 5th century Gaelic epics and were hugely influential. They were widely translated and inspired European Romantics like Johann Wolfgang von Goethe, Friedrich Schiller and Melchiorre [Melchior] Cesarotti.

Scotland's Romantic legacy can be seen in many of the bestselling authors of the 19th century, from Alexandre Dumas to Leo Tolstoy.

See a selection of printed books from 1460 to 1900 in the 'Rise of literacy' online collection in the Digital gallery.