Scots in the Caribbean 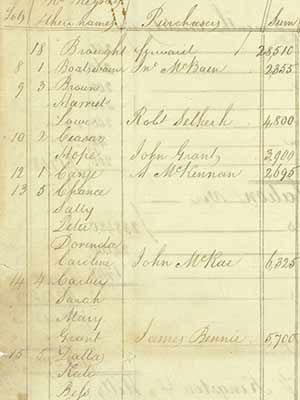 While direct Scottish involvement in the transportation of enslaved people was limited, Scots were involved deeply with slavery in the Caribbean. Vast fortunes were made from the enslaved labour of men, women and children.

It is difficult to know the precise number of people from Scotland who moved to the Caribbean. Modern estimates suggest that thousands of Scots made this journey in the second half of the 18th century alone.

An important feature of Scottish migration to the Caribbean was its often temporary nature. Many stayed for a short period before returning to Scotland, although there are examples of Scots who remained in the Caribbean for much longer.

Another feature of Scottish connections to the Caribbean is the wide range of roles Scots carried out there.

One obvious way that Scots became involved with slavery is through ownership of plantations and enslaved people.

Legal documents concerning the lease of part of Higher Plantation in Tobago to William Marshall (active around 1774) are included in the National Library of Scotland's collections. The document lists the names of enslaved people included in the lease, showing their legal status as property.

Absentee ownership of plantations – where the owner did not live in the West Indies – is another important feature of Scotland's slavery connections.

The family papers of the Grahams of Airth provide an example of Scots who ran a plantation from a distance. The papers include correspondence from Jamaica about Ardoch Penn, which Thomas Graham Stirling (1768-1836) held in trust for his cousins.

Plantations in the Caribbean provided employment for Scots who managed estates on behalf of their owners, including absentees. These people were known as attorneys. Other workers, known as overseers and bookkeepers, were tasked with enforcing the regime of enslaved labour through violence and the threat of violence.

A similar account was produced by Alexander Innes (1792–1875) in a manuscript journal. It offers a detailed examination of plantation life, including the brutalisation of enslaved people.

Scottish doctors in the Caribbean

Scottish doctors played a prominent role in the Caribbean in the 18th and 19th centuries.

Using the training they received at Scottish universities, they delivered treatment to enslaved people. This medical assistance was not motivated by care or compassion, but rather was designed to maximise enslaved people's ability to carry out labour.

'Memoirs of the Late William Wright, MD' includes a biography of Wright (1735-1819) and copies of his essays on medicine and botany. Wright had various stints in Jamaica, during which he practiced medicine on plantations and invested money into the purchase of enslaved people.

His life and writings demonstrate the ties between Scottish medicine and slavery in the Caribbean. The region became a place where medical knowledge developed by the Caribbean's indigenous population (who lived there before colonisation), enslaved people and European doctors like Wright was exchanged and circulated.

Scots worked as merchants and colonial officials throughout the Caribbean islands. The manuscript memoir of the Scottish writer Hector MacNeill (1746-1818) contains information on his time in the Caribbean, during which he worked as a merchant and a colonial administrator.

MacNeill's memoirs offer an account of his life in the various Caribbean islands he visited. They also reflect his support for improving in the moral behaviour and conduct of the overseers and administrators, while maintaining the system of slavery until such time as it could be gradually abolished.

Maps of the period show further evidence of the Scottish presence in the Caribbean.

A detailed map of Jamaica was produced by James Robertson — a surveyor from Shetland — in 1804. The map shows the names of plantations, including many that Scottish colonisers named after themselves or places in Scotland familiar to them.

Scottish women in the Caribbean

The National Library’s collections include items relating to slavery written by Scottish women who lived in the Caribbean.

In the 1770s, Janet Schaw visited Anitgua and St Kitts. She included observations about enslaved people in a journal she kept during her visit.

Living on Hopewell estate in Jamaica in 1801, Jane Murray wrote home to complain about the behaviour of the estate’s enslaved population. This letter forms part of a larger collection of letters and documents about Scots in the West Indies.