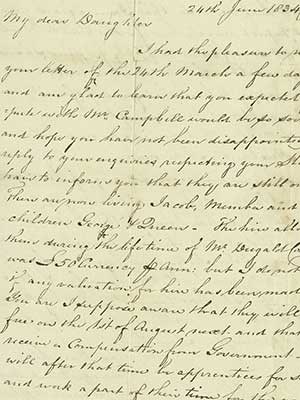 A letter from Eleanor Affleck to her
daughter Sarah Affleck, sent from
Jamaica to Edinburgh in 1834
[Library shelfmark: MS.50277, ff.6-9].

While British participation in the Atlantic slave trade was made illegal in 1807, slavery continued in its Caribbean colonies. People who were enslaved before 1807 remained enslaved after the abolition of the slave trade. In the 1820s and 1830s, Scots became involved in the campaign to abolish slavery entirely.

Enslaved people played a role in the abolition of slavery through acts of resistance, including a large uprising in Demerara in 1823 and another in Jamaica in 1831-32. These instances helped to turn public opinion against slavery.

Like earlier efforts to abolish the slave trade, 19th-century abolitionists in Scotland made use of public meetings, petitions and printed material to further their cause.

For example, the Edinburgh Anti-slavery Society spread its message by printing pamphlets on the necessity to abolish slavery. These pamphlets would have been accessible to ordinary people, allowing them to engage with abolitionist ideas.

Pamphlets published by the Edinburgh Anti-slavery Society, including its first annual report, are available for consultation at the National Library of Scotland.

Another example of abolitionist tactics appears in a printed account of a speech delivered by the Rev Dr Robert Burns (1789-1869) at an anti-slavery meeting in Paisley in 1830.

After his speech, the meeting participants voted to send an anti-slavery petition to Parliament. A pamphlet produced after the meeting includes Burns's speech and a copy of the petition the Paisley abolitionists drew up.

The legislation to abolish slavery in the Caribbean was passed by Parliament in 1833. Slavery came to a formal end on 1 August 1834.

However, enslaved people were made to work unpaid as 'apprentices' after emancipation. The apprentice system ended in 1838.

Former enslavers were granted compensation for the loss of their 'property' after the end of slavery. The Library's manuscripts collections includes material that refers to compensation claims.

Compared to their proportion of the United Kingdom's population as a whole, Scottish absentee enslavers were over-represented among the people awarded compensation.