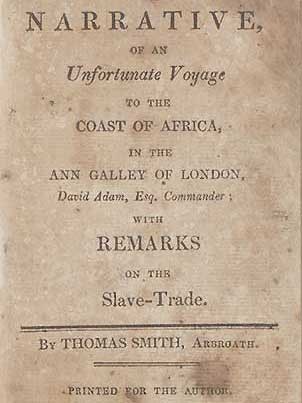 Clear evidence of Scottish involvement in the transatlantic slave trade exists in the National Library of Scotland's collections.

Modern research has identified 27 slave trade voyages that left the ports of Greenock, Port Glasgow, Leith and Montrose between 1706 and 1766. These ships took around 4,000 to 5,000 captives across the Atlantic and into slavery.

When considering Scotland's direct involvement with the Atlantic slave trade overall, the number of voyages is small. One reason so few ships sailed from Scottish ports in comparison to the ports of London, Bristol and Liverpool is not a reflection of limited Scottish involvement in the slave trade. Prior to the 1707 Act of Union, Scottish access to English ports was restricted by the Navigation Acts. This allowed English ports to establish a monopoly in the trade in enslaved people. Indeed, Scots were directly involved in the transatlantic slave trade as investors, owners of enslaved people, and overseers on the plantations. They were also in the extensive range of professions and trades involved in maintaining the infrastructure of the slave trade.

One example of a Scot who participated in the slave trade is Richard Holden of Baldovie, near Dundee (active 1747 to around 1761).

Holden was a surgeon on numerous slave trade voyages, during which he helped to enslave hundreds of people from West and West-Central Africa.

The letters he sent to his relatives in Scotland provide a detailed account of how the slave trade operated. They include descriptions of the conditions endured by enslaved people on the so-called 'Middle Passage' — the stretch of the Atlantic ocean from West Africa to the Americas.

Opposition to the slave trade

Thomas Smith's (active 1762 to around 1813) 'Narrative of an Unfortunate Voyage to the Coast of Africa' was published in 1813 after he was encouraged to write down his experiences by members of the Edinburgh Abolitionist Society.

Smith, from Arbroath, was involved in the slave trade in the 1760s. His memoir highlights the inhumane treatment of enslaved people and examples of their resistance, including struggles to seize control of slave trade vessels.

Manuscript and rare book collections at the National Library include material on prominent Scottish politicians' engagement with the slave trade, including Henry Dundas (1742-1811).

Dundas was one of the most influential Scottish political figures of the late 18th and early 19th centuries. In his role as Secretary of State for War, Dundas oversaw the British invasion of Haiti, where a revolution led by enslaved people had begun in 1791.

The invasion was partly motivated by the fear that enslaved people in the British colonies would take inspiration from the Haitian Revolution. The British were committed to restoring slavery on Haiti but the invasion was ultimately a failure and ended in a British retreat from the island. Through the remainder of the 1790s, Dundas was instrumental in delaying the abolition of the transatlantic slave trade.

Letters and memos written about the situation in the West Indies and the slave trade, written by Dundas or sent to him, form part of the Library's Melville Papers.

Naval operations against the slave trade

After the abolition of Britain's involvement in the Atlantic slave trade in 1807, Britain's navy switched from escorting ships carrying enslaved people to attempting to suppress the now illegal slave trade.

The papers of Gilbert Elliot-Murray-Kynynmound, second Earl of Minto (1782-1859) include a number of letters concerning naval operations carried out against the slave trade in the 1830s and 1840s.

The Slave Voyages database contains more information on the history of the Atlantic slave trade. It provides records of individual slave trade voyages, including those that began in Scottish ports.