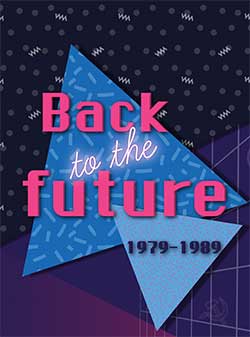 Continuing the Library's 1980s retrospective, our 'Back to the future: 1979-1989' display included intriguing items chosen to illustrate our vast collections about this remarkable decade. Ran from 1 August to 12 November 2019.

The 10 years from 1979-1989 were eventful and transformational. 2019 marks key anniversaries, including 40 years since Margaret Thatcher came to power, and 30 years since the Tiananmen Square massacre and the fall of the Berlin Wall.

The 1980s saw the dawn of home computing, the arrival of synth pop and myriad fashion fads. It was also a time for profound shifts in international relations, British politics, global economics, culture and society.

A decade of collecting

During the 1980s, the Library added 2.9 million publications to its collections. This display uncovers some of the hidden treasures from this extensive collection, highlighting important, memorable and thought-provoking material of the time.

From Jane Fonda's workout plan to memories of the miners' strike and advice for surviving a nuclear attack, the display offers insight into the way we lived, as well as an understanding of how the 1980s shaped the way we live today.

Novels, texts, pamphlets, magazines, newspapers and official publications are all being shown. Arranged in themes, some items emphasise significant historical events, others reminiscence on the trends of the day. Here are just some of the themes in the display:

The Library's extensive 1980s collections inspired the creation of a retrospective website. Launched in May 2019, the 'Back to the future 1979-1989' site includes long reads about the 1980s written by Library staff and guest writers.

A list of essays include pieces written about state funerals, denim crazes and the Challenger space shuttle disaster. There is also an account of the Tiananmen Square massacre by Kate Adie, and Ian Rankin's personal recollections of the golden age of hi-fi.

In a 'Watch and listen' section of the site, selected vintage videos from the Moving Image Archive can be viewed. Footage about many 1980s events is included, such as the miners' strike, Torness demonstrations, and Aberdeen football club's European cup victory.