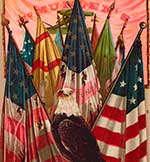 In this display, the American Civil War was refracted through the prism of the National Library of Scotland's collections. Ran from 21 January to 29 March 2015.

Echoes of Union and Confederate voices resonated in a National Library of Scotland display commemorating the end of the American Civil War.

'Yankee cries and Rebel yells' presented items from the Library's collections that draw our attention to the conflict and its extraordinary legacy, which divides people even today.

And alongside American voices were those of Scots who were involved in both sides of the fight.

In 1861, the bitter four-year struggle began that split America and claimed the lives of an estimated 620,000 soldiers.

Material selected from thousands of items in the Library's collections illustrated the three main themes of the display:

The display included correspondence, political pamphlets, newspapers and memoirs from the period.

All the items — whether voicing the 'battle cries' of civilians or soldiers, academics or film-makers — gave insight into the Confederates' howling Rebel Yell and the Union cries of freedom heard 150 years ago.

Deed of sale of slave woman