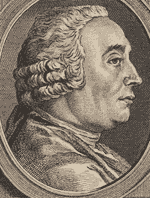 From 5 May to 28 June 2011 we highlighted items from our David Hume collections.

In 2011 we celebrated the 300th birthday of David Hume — generally regarded as the most important philosopher to have written in English.

Edinburgh-born Hume (1711-1776) was the author of major philosophical works, most notably the 'Treatise of Human Nature' (1739-1740), that have remained important to the present day.

The international Hume Society fosters the study of Hume and publishes the twice-yearly journal 'Hume Studies'.

A treatise of human
nature

Hume was one of the key figures of the Scottish Enlightenment — a period of great intellectual and scientific change and achievement in Scotland when many great thinkers rubbed shoulders in Edinburgh.

Hume debated with them at the Select Society, and regularly exchanged letters with the likes of the economist Adam Smith, author of 'The Wealth of Nations', and the historian William Robertson. 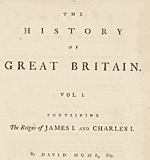 The history of Great
Britain

But in his lifetime Hume enjoyed a greater reputation across Europe as an historian.

While Keeper of the Advocates Library in Edinburgh (1752-1757), he began to write his multi-volume best-seller 'The history of England'.

The first volume, on the reigns of James VI and I and Charles I, was published in 1754.  It was entitled 'The history of Great Britain' because it it covered a period following the Union of the Crowns. Earlier volumes required Hume to change the title to 'The history of England'.

Letter from a
gentleman

Although in his lifetime Hume became popular and respected as an essayist and best-selling historian, he was also a controversial figure on account of his philosophical scepticism and perceived atheism.

The only known copy of his 'A letter from a gentleman to his friend in Edinburgh' (Edinburgh, 1745) shows him responding to accusations of heresy and atheism directed at him by clergy and academics

As Keeper of the Advocates Library, Hume played his part in building the collections which at its foundation in 1925 formed the basis of the new National Library of Scotland.

The National Library has assiduously collected the work of one of its most famous forebears. Today it is a centre of Hume scholarship, with world-renowned collections of his correspondence, papers and books.

Most distinguished of all is the collection of Hume manuscripts bequeathed to the Royal Society of Edinburgh in 1838 by the philosopher's nephew, and now on deposit in the National Library.

Among highlights on display from the Hume collections were: