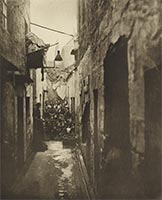 'The old closes and
streets of Glasgow'.

Architectural photography from the 19th century opened a window into the past. These photographs show buildings that have changed significantly, no longer exist, and many which still stand today.

Thomas Annan (1829-1887) began his career as a commercial photographer, producing cartes-de-visite, landscapes and stereoscopic views. Along with his sons John and James Craig Annan, he later became famous for photographing Glasgow's architecture.

'The old closes and streets of Glasgow'

'The old closes and streets of Glasgow' was based on photographs taken between 1868 and 1871, which were commissioned by the City of Glasgow Improvements Trust.

Annan photographed the city's slums prior to clearance, and documented the impoverished living conditions of Glasgow's working class.

'The old country houses of the old Glasgow gentry'

The book included descriptions of the houses, and the families who lived there.

Photographs of Scottish architecture were on display in '"Sun-pictures" and beyond', at the Library from 30 November 2016 to 26 March 2017.