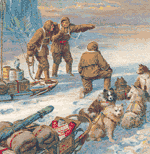 Diary extracts, letters, books, postcards and maps were on show to help us tell one of the great stories of achievement, tragedy, endurance and courage.

Led by Captain Robert Falcon Scott, the expedition found itself in a race with Norwegian explorer Roald Amundsen to reach the South Pole.

The following year, the men began their journey across the Antarctic.

Eventually most of them turned back, taking the dogs with them, and leaving Scott and four others to complete the task, hauling the sledges of supplies themselves.

On 17 January 1912 the small group successfully reached the pole — only to find that Amundsen had got there before them.

On their journey back through one of the most hostile environments on the planet, all five men perished. They had been only 11 miles from away from a supply depot, and their tragic deaths stirred a national outpouring of grief.

Scientific achievements of the expedition

The story of the pole party has held the public's fascination ever since.

And while the fact of reaching the South Pole was a significant achievement in itself, the expedition was more than just that.

Scott's expedition went beyond the edge of the known world. It carried out an extensive programme of scientific experiments, which improved our understanding of zoology, meteorology, geology, and the very make up of our planet.

Exhibits from the polar collections

A letter about
a donation

Our display charted the story from the planning of the expedition through to its legacy. Exhibits included:

Material for this small display came from the mountaineering and polar collections and the manuscripts collections at the National Library of Scotland.