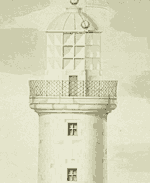 Our display about the building of the Bell Rock Lighthouse ran from 12 January to 28 February 2011.

On 1 February 1811, the Bell Rock Lighthouse lanterns were lit for the first time. Now regarded as one of the seven wonders of the industrial world, the lighthouse took Robert Stevenson and his men four years to complete.

Our small display chronicled the epic construction story, as part of a nationwide programme of events celebrating a great engineering achievement.

On show were letters, drawings, ledgers and plans from the business archive of Robert Stevenson & Sons.

We also screened films of the Northern Lighthouse Board's annual inspection of lighthouses from the 1960s. 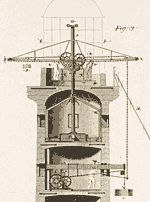 The Bell Rock Lighthouse is a white tower over 115 feet (35 metres) tall standing in the North Sea off Scotland's east coast. Only at low tide is the Bell Rock, or Inchcape, itself visible.

Before 1811, this dangerous reef about 11 miles out from Arbroath was responsible for thousands of lost lives.

Glasgow-born engineer Robert Stevenson visited the rock in 1800, and was convinced that a lighthouse could be built there. He submitted plans to Parliament which were accepted in 1806, after advice was sought from John Rennie, one of the most influential engineers of the time. 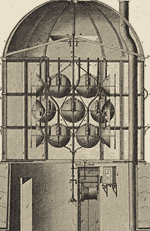 Building began in 1807, but progress was slow. Because of tides and weather, work could only take place in the summer months, and initially only for two hours at low tide.

Conditions were appalling and often dangerous. The supply vessel, 'The Smeaton', could not land on the rock, so stones and other building materials had to be ferried to the rock on small boats and lifted off by crane. More than 2,800 stones were needed to complete the building — and some weighed more than a ton.

It is a testament to Stevenson's engineering skill that the masonry remains intact and unaltered since construction finished in 1810. Although the lights have been changed and the interior modernised, the Bell Rock Lighthouse is much as it was when it was built. 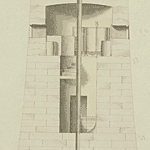 Our display features illustrations showing the lighthouse at various stages as it rose from the rock. They range from the plans drawn up by Stevenson and Rennie to cross-sections showing the interior floors of the finished tower.

Among other exhibits are:

Stevenson collections at the National Library

Find out more about material in our collections that relates to Robert Stevenson and the family business: