Forth Bridge: artist's view.
From Forth Bridge
illustrations 1886-1887

Skill and sacrifice went into the building of the famous rail bridge over the River Forth. Our display told the story of its construction. Ran from 1 April to 21 June 2015.

We commemorated the construction and opening of the iconic Forth Bridge in this display at the National Library of Scotland.

'The Forth Bridge: Building an Icon' presented items from the Library's collections that highlight the evolution of the rail bridge's design, the challenges of construction and the celebration of the bridge's opening in 1890.

For hundreds of years ferries provided a connection across the river, but by the 19th century a better solution

was needed. In 1806, designers considered digging a tunnel under the Forth.

With the spread of the railway network in the 19th century, railway companies competed to operate the fastest route from London to the north of Scotland. Developments in engineering and steel manufacture meant that dreams of a bridge on the scale required to enable trains to cross the Forth could become a reality.

The Prince opens the bridge

The Forth Bridge was a pioneering design equipped to withstand enormous pressure and strong winds.

Workmen were exposed to all weather conditions and the dangers of working at height. Accidents were frequent. Some safety measures were introduced, such as boats in the Forth ready to rescue anyone who fell, but these did not prevent fatalities.

At the opening ceremony on 4 March 1890, the Prince of Wales declared that the bridge 'marks the triumph of science and engineering skill over obstacles of no ordinary kind'.

The display included early crossing designs, newspapers, technical illustrations, inspection reports and photographs of the development of the bridge.

All the items give an insight into the origins, building and grand opening of the Forth Railway Bridge 125 years ago. 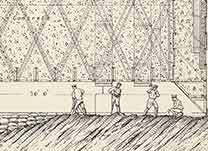 A testament to Victorian engineering, the Forth Bridge took eight years to build.