Items from our collections were on show to mark the centenary of the birth of Jessie Kesson, an important 20th-century Scottish writer. From 22 September to 25 November 2016. 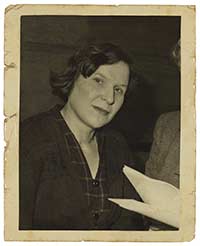 Manuscripts, books and letters from Jessie Kesson's literary archive were on display at the National Library of Scotland, in celebration of the writer's life and work.

Inverness-born Kesson (1916-1994) was a novelist, playwright and radio producer who often wrote in her native Scots.

Kesson had a difficult start in life, born in a workhouse and spending some of her childhood in an orphanage. She had many different jobs, from farm worker and life model to social worker and BBC radio producer. Above all, however, she was a writer.

A writer of novels, poems, film scripts and radio plays, Kesson was first published in 1940. Her life experiences inspired her fictional work, much of which was set in the rural north-east of Scotland. She was awarded honorary doctorates in the 1980s in recognition of her achievements.

Our display drew on Kesson's literary archive, given to the Library in 2016. Kesson's distinctive voice and self-depreciating humour leap out from her handwritten manuscripts and typed documents, including fiction drafts, personal letters and poems.