200 years of 'Pride and Prejudice'

From Austen to zombies

A celebration of Jane Austen's favourite of her own books, regarded as one of the greatest novels in the English language. Ran from 10 July to 15 September 2013.

This display takes 'Pride and Prejudice', Jane Austen's second novel, through the 200 years of its history.

From the first edition through to graphic novels, we show some of the variety of books which have helped millions of readers take the story to their hearts.

The first edition of 'Pride and
Prejudice', from 1813.

In the Library's collections are over 150 different editions and adaptations of 'Pride and Prejudice', along with many other related books. Our display presents a sample of this material to convey the novel's enduring literary and popular appeal.

Among the highlights of the display are:

Jane Austen's original manuscript for 'Pride and Prejudice' has not survived. This first edition of the book is therefore of special importance in the history of the text.

Our copy of the first edition, published in three volumes, is a rare example of the book surviving in the original simple binding known as 'publishers' boards'. It is in near-perfect condition. This edition is part of our Hugh Sharp collection.

Richard Bentley's edition published in 1833 established 'Pride and Prejudice' as part of the literary canon.

It was also the first edition to be illustrated, and brought the book back into print for the first time in over a decade. Bentley published it as part of his 'Standard novels' series.

Hugh Thomson's classic illustrations in the 'Peacock' edition are still familiar to modern readers, as they have been reprinted in many editions down to the present day.

Alongside the 'Peacock' edition we display an array of illustrated editions showing how different people have imagined the characters over the years.

R W Chapman's edition of 'Pride and Prejudice' is a monument of modern textual scholarship.

Published in 1923 as part of his edition of all Austen's novels, it ensured that scholars in the relatively new discipline of English Literature took the novels seriously as literary texts.

Our display includes editions published to tie in with film and television adaptations, as we show how those dramatisations influence the way the novel is read.

Starting with the 1940 film version, these editions range through 1990s 'Darcymania' to the 2005 film starring Keira Knightley and Matthew Macfadyen.

Some very unacademic material in our collections allows us to see how people respond to 'Pride and Prejudice' today.

On show are books related to the novel which have been published in the past 10 years and have joined our collections thanks to legal deposit.

Exhibits range from self-published fan fiction to the bestselling 'Pride and Prejudice and zombies', where Elizabeth Bennet is transformed into an expert warrior slaying the undead.

Light and bright and sparkling

'Pride and Prejudice' was first published in 1813. A romantic comedy, it tells the story of Elizabeth Bennet, the witty heroine, and Mr Darcy, the rich, handsome hero.

To some, the novel's concentration on finding one's ideal partner is frivolous and escapist. Even Austen herself wrote in a letter that 'The work is rather too light & bright & sparkling; — it wants shade'.

More than a romance 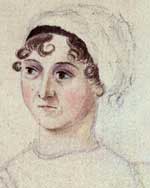 But this novel is far more than the stereotypical romance where 'opposites attract'.

Jane Austen is always aware of the economic considerations that affect relationships, and concerned with the moral responsibility every individual must take for their choices in life.

In this context, critics have found 'Pride and Prejudice' a profoundly serious book.

And yet it is the novel's wit, humour, and many memorable comic characters and moments which have made it irresistible to readers from the first time it appeared in print.

The first person who fell in love with 'Pride and Prejudice' was its author. She described the book as 'my own darling child', and imagined futures for the characters in conversation with her family and friends.

Perhaps Austen's own enjoyment in writing the story and imagining the characters has infected the way readers have responded to the book ever since.