Some of the most beautiful books ever printed were on display in a celebration of the book as a work of art. From 26 November 2015 until 13 March 2016. 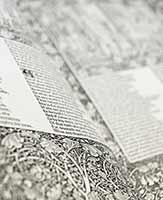 Ten handcrafted books were on show at the National Library of Scotland in 'The book beautiful', including two which are arguably the most beautiful books ever printed.

Private presses from the late 19th century onwards were inspired by the high standards of 15th- and 16th-century printers. Exploring these connections, our display matches early printed masterpieces with the 19th- and 20th-century texts they influenced.

Beautiful volumes on display include:

'A note by
William Morris'

'The book beautiful' brought together hundreds of years of beautiful books:

A poet, writer, artist, craftsman and designer, William Morris (1834-1896) actively collected examples of early European printing. His own designs and typefaces were greatly influenced by these skilfully-crafted texts from the 15th and 16th centuries. Read more about William Morris and the Kelmscott Press

Two Dante publications were on display: the first illustrated edition of his complete works published in 1481, and a 1909 private press edition of the 'Divine comedy'. Read more about Dante's works