Celebrating trailblazers of the past

A treasures display at the National Library of Scotland

Highlighting the enduring legacy of some remarkable Scottish women scientists. Ran from 1 March to 30 April 2013. 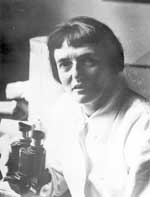 The names of Scottish female scientists do not readily spring to mind, but that certainly does not mean they did not exist.

A remarkably large number of Scotswomen over the past two centuries made outstanding scientific achievements. Yet, with a few exceptions, no-one knows who these women are.

This display at the National Library of Scotland aims to rectify this in a modest way.

It tells the stories of 11 Scottish women of science who made significant contributions to knowledge in different disciplines.

They have been chosen to represent the many other women there simply wasn't room to include.

All of these women scientists were active in a period when it was difficult for women to be appointed to senior positions in academia, research or industry.

The stories behind their lives illustrate exceptional ability combined with determination to succeed.

Women were only allowed to graduate from Scottish universities after the passing of the Universities (Scotland) Act 1889.

Our selected 11 trailblazing women of science are:

Published her illustrations of plant specimens at Chelsea Physic Garden. The botanical accuracy of her depictions is still admired today.

Known on her death as as the 'Queen of Nineteeth Century Science'. She wrote three major works and was the first woman elected to the Royal Astronomical Society.

Published a book in 1794 called 'An essay on combustion', clearly the work of a skilled chemist. She was elected as an honorary member of Philadelphia Chemical Society.

Discovered hundreds of stars — and the Horsehead Nebula — while working at Harvard College Observatory. She had emigrated from Dundee in 1878.

The first woman to gain a PhD from the University of Munich. She was one of the first geologists to show that limestone peaks were formed by movements in the Earth's crust.

© The Hunterian,
University of
Glasgow 2013

Known for her work on parasites that cause illnesses like sleeping sickness. She played an important role in both world wars in identifying types of bacteria that infect war wounds.

A goddaughter of Queen Victoria with passion for engineering. She served on several ships, gained a Panamanian chief engineer's certificate, and was decorated for bravery in wartime.

A pioneer in the study of genetic mutations and one of the first scientists to understand nuclear radiation dangers. She was made a Fellow of the Royal Society of Edinburgh.

Known for her impressive research in the science of crustaceans such as lobsters and crabs. She worked at the British Museum and provided advice and expertise at home and abroad.

Made an important discovery in graph theory which is still cited today. She spent most of her working life in the USA with large companies, such as Bell Laboratories.

Carried out pioneering work into the structure of crystals with Arnold Beevers. She was the first Director of the Fluid Dynamics Unit at the University of Edinburgh.