This map shows the outward and return journeys to the South Pole made by Robert Falcon Scott and his team in 1911-1912. It was included in the 1923 edition of 'Scott's Last Expedition'. 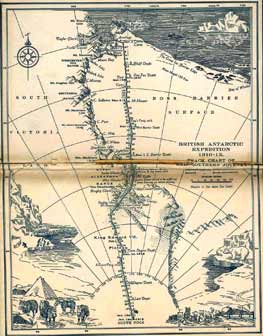 Scott followed the route pioneered by Ernest Shackleton in 1909 when he made his journey to the furthest point south. The route crossed the Beardmore Glacier, and then on to the Polar Plateau.

The British party arrived in Antarctica in January 1911, and set up camp on Ross Island in McMurdo Sound. The location was named Cape Evans, after Scott's second-in-command, Lieutenant Edward 'Teddy' Evans.

Early in the year, teams of men laid depots of food and equipment southwards in preparation for the journey to the Pole. You can see Corner Camp, Bluff Depot, and One Ton Depot marked on the map.

One Ton Depot was the largest and final depot, and was named after the weight of its contents. Due to weather conditions and problems with the ponies, the depot was not laid as far south as Scott had originally intended. This had consequences for the return journey from the Pole. Scott and his men were found dead in their tent only 11 miles from the depot. A severe blizzard and ill-health had prevented them from travelling any further. The position of the tent and the depot are shown on the map.

On 16 November 1911, Scott set out from Cape Evans with 15 men. The map shows the outward route to the Pole with the dates marked at each point of the journey.

The men were divided into four teams: three support parties and the polar party itself. The teams continued to lay depots along the route to prepare for the return journey. You can see these depots marked on the map.

The map also shows when and where the support parties turned back to Camp Evans. Meares and the dog teams returned to base on 11 December 1911. On 22 December, Atkinson and his party turned back. The final support team left Scott and the polar party on 3 January 1913, about 150 miles from the Pole.

Scott and the polar party reached the South Pole on 17 January 1912, and started on the return journey the following day.

The map shows that Petty Officer Evans died on 17 February 1912, near the base of the Beardmore Glacier.

Captain Lawrence Oates walked out in a blizzard to his death on 17 March 1912, just two days before Scott and his two companions — Bowers and Wilson — pitched their tent for the last time.

The map is illustrated with images of ponies, dogs, penguins ... and polar bears! At the time when the map was made in 1914, it was not common knowledge that polar bears are only found in the Arctic regions surrounding the North Pole.

In contrast, penguins only live in the southern hemisphere.

This second map compares the routes taken to the Pole by Scott and the Norwegian expedition led by Roald Amundsen.

The Norwegians set up their base camp, Framheim, further along the Ross Ice Shelf, near the Bay of Whales. It was located about 400 miles from the British base at Cape Evans and about 60 miles nearer to the Pole.

Amundsen pioneered a new route to the Pole across the Axel Heiberg Glacier, arriving on 14 December 1911. This was 33 days before the British party.

Many of the natural features in Antarctica, such as Cape Evans, are named after explorers or people involved with the early Antarctic expeditions. Find McMurdo Sound, the Ross Sea, and the Beardmore Glacier on the map. Try to discover more about the people behind the names. Find a modern map of Antarctica. Can you find any features named after Scott's polar party?