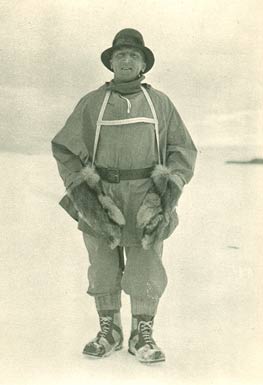 Bowers in some of the expedition gear.

Born in Greenock in 1883, Henry 'Birdie' Bowers was a popular member of the 'Terra Nova' expedition. Standing at only 5'4, he was a strong, robust, straightforward character and at the same time possessed a deep spirituality. He developed a special affinity with Edward Wilson who also shared his strong Christian faith and who was to perish with him in his return from the Pole.

Bowers was appointed to serve primarily as a junior officer in charge of the stores. It was the most arduous, difficult, thankless and yet the most responsible task of all. He tackled it with vigour and enthusiasm.

Once aboard the 'Terra Nova', his shipmates were already discovering Bowers' qualities. Despite his modesty and unimpressive demeanour, he was a figure of both inner and outer strength. Only two months after knowing him, Edward Wilson wrote to his wife:

'Bowers, whom you will remember by sight, a short red-headed thick-set little man with a very large nose, is a perfect marvel of efficiency-but in addition to this he has the most unselfish character I have ever seen in man anywhere.'

Bowers' contribution to the expedition, including  the scientific work, was immense. At Cape Evans, he was fastidious in his meteorological readings and on the final journey to the Pole, he kept a detailed meteorological log at considerable physical cost to himself. In spite of this zest to undertake scientific work, he also fitted the mould of the romantic explorer.

Before leaving New Zealand in November 1910, he wrote to his mother about his reasons for taking part in the dangerous adventure ahead:

'They are not for self-advancement or anything sordid as you know. The chief thing that impels is the indefinable call that is as unexplainable as it is insistent. It cannot be otherwise and was foreknown from the beginning. Your son is one of the few in this prosaic age who can have the privilege of realizing what must have been a commoner thing when the world was younger.'

Mrs Bowers fostered a sense of thoughtfulness for others and personal self-reliance in the young Henry and his two sisters. His father, Alexander Bowers, had been a naval captain, but died in Burma when Henry was only four years old. Mrs Bowers would often make the young Henry responsible for the money on all their family outings and in doing this encouraged his strong sense of responsibility.

Mrs Bowers also possessed a deep religious faith. She brought the family up in an old-fashioned evangelical tradition. The household assembled daily for Bible-reading, prayers and hymns. Outwardly, Henry was a sturdy, happy little boy, full of energy and already showing traits of manly responsibility. Inwardly, there was a spiritual affinity with his mother which grew as he got older.

Throughout his life, Bowers never questioned the faith of his childhood. It was the background of his whole world. It was later to become tied to his thoughts of home and his mother. Until the last moment of his life, it was to his mother and her faith that he owed everything, as he gratefully confessed in his last letters.

Next to his family, his oldest and best friend was Glaswegian James Paul who remarked: 'Henry's abiding faith was that everything worked out to the ultimate good of those who persevered'. Both in the pursuit of his ambitions and in the execution of the duties which they demanded of him when realised, he was nothing if not persevering.'

His physical fitness and sturdy health probably had a large part to play in his demeanour but he also deliberately cultivated this outlook and attitude to life. He once wrote to a friend: 'I hope that your horizon is bright: remember, if it is not, you must not look outside you for the cause, but inside (at least that is my experience).'

Bowers joined the 'Terra Nova' in Portsmouth on 6 June 1910. He immediately impressed his companions with his hard work and cheerful outlook. When the ship disembarked at Cape Evans, Bowers continued to carry out his role in charge of stores along with other varied duties.

At the end of June 1911, Edward Wilson, Apsley Cherry-Garrard and Bowers set off on their winter journey. This journey is now widely accepted as a feat of endurance and courage that has not been surpassed in the annals of polar exploration. In reading Bowers' brief account of it however, apart from the bare facts, one might be forgiven for thinking that this journey had been nothing out of the extraordinary.

Bowers was not one to dwell on any past tribulations but to relish the present and plan for the next adventure instead.

'I am Captain Scott's man'

Bowers' hardiness and strength, mental and physical impressed Scott. Scott had intended a four-man party in the journey to the Pole but at the last moment decided on five. This was a risk as all the plans and food supply had been made for a four-man team. Since the fifth man was Bowers, it must have seemed a risk worth taking for Scott. While the other four pulled the sledge on skis, Bowers had to do this on foot. In Scott's diary, there are many references to this extra exertion which Bowers not only endured but even welcomed. An extract from his last letters home before the final journey to the Pole reads:

'I shall consider no sacrifice too great for the main object — I am Captain Scott's man and shall stick by him right through.'

An extract from Bowers' last letter to his mother, the date is uncertain, but from about 22 March 1912:

'In His keeping I leave you and am only glad that I am permitted to struggle on to the end ... Although the end will be painless enough for myself I should so like to come through for your dear sake. It is splendid to pass however with such companions as I have ... There is no shame however and you will know that I have struggled to the end.'

Do you think Bowers' qualities and values were unique in Edwardian Britain? Do you think these are important qualities in an explorer?

Thinking about Bowers' attitude to duty and responsibility, do you think this is old-fashioned or something that is missing in today's society?

A sense of glorifying in physical and perhaps mental struggle seems to echo through Bowers' last letters, why do you think this is?

Is having a strong spiritual faith seen as a particular strength in the 21st century?

Bowers was only 29 years old when he died and fully believed in the sacrifice he made alongside his companions. What impact do you think this had on young men in Britain when they found out the news?