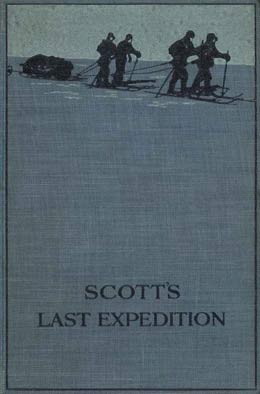 This image shows the front cover of 'Scott's last expedition'. The book was first published in 1913, but this edition dates from 1923.

'Scott's last expedition' was first published by Smith Elder in 1913. In February of that year, news reached home that Scott and his four companions had died on their return journey from the South Pole. The legend of 'Scott of the Antarctic' began to take hold, and the book was an instant success. Three editions were printed in 1913 alone.

The book was originally published in two volumes. The first volume comprised an edited version of Scott's diaries. The second volume contained reports of some of the scientific work undertaken during the expedition.

In 1923, 10 years after the expedition, a cheaper, more accessible edition of the book was published by John Murray. This comprised only Scott's diaries, and sold in thousands over a number of print runs.

The 1914 edition of the book included an introduction by J M Barrie, the creator of Peter Pan. Barrie was godfather to Scott's son, Peter. He was one of the seven people that Scott chose to write to just before his death. Scott asked Barrie to take care of his wife and son. Scott also writes:

'We are showing that Englishmen can still die with a bold spirit, fighting it out to the end'.

Scott also wrote final letters to Edward Wilson's wife and Henry Bower's mother. All of the letters were published in 'Scott's last expedition' in 1913.

'Scott's last expedition' helped to publicise the details of the expedition. The story of the polar party affected people from all walks of life. People began to donate money to the memorial fund which was set up to support the families of those who had died. More than £75,000.00 was raised by public donation — this is just over £4 million in today's currency. Some of the funds were used to set up the Scott Polar Research Institute in Cambridge.

'Scott's last expedition' was largely based on the diaries which Scott kept throughout the British Antarctic Expedition. The three notebooks, as well as the seven final letters, were found on his body eight months after his death. Although other members of the polar party wrote journals describing the journey, Scott's entries were the most detailed. Scott's journals contained much of the information which is now known about the journey to the Pole. They also contained accounts of the events leading to the deaths of the men in the polar party.

Scott's last diary entry was made on 29 March 1912, and finishes with the following words:

'I do not think we can hope for any better things now. We shall stick it out to the end, but we are getting weaker, of course, and the end cannot be far. It seems a pity, but I do not think I can write more. R Scott.

'For God's sake look after our people'

The Scott Polar Research Institute in Cambridge is currently republishing Scott's diaries as a blog: see the 'Polar diaries project'.

Message to the public

'Scott's last expedition' also included Scott's 'message to the public'. This gave Scott's explanation of the outcome of the expedition:

'The causes of the disaster are not due to faulty organisation, but to misfortune in all risks which had to be undertaken'.

The message finishes with the following words:

'Had we lived, I should have had a tale to tell of the hardihood, endurance, and courage of my companions which would have stirred the heart of every Englishman. These rough notes and our dead bodies must tell the tale …'

Find a copy of Scott's 'Message to the public', and list the detailed reasons he gives for the outcome of the expedition. Compare these with other, later accounts of the expedition. For example, you might want to look at 'The worst journey in the world' by Apsley Cherry-Garrad (Chapter 19), published in 1922. Why might Scott have felt it important to write his 'Message to the public'?

The diaries and journals kept by Scott and the polar party provide most of the information we have about the journey to and from the South Pole. What is the value of using diaries to find out about the past? What might be the challenges of using personal documents, such as journals and letters, as historical sources?

You can find out more about the manuscript of Scott's diaries on the British Library website.