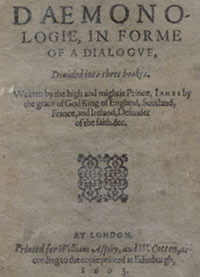 There is no evidence that James VI of Scotland was greatly interested in witchcraft before 1590. For much of his reign he remained sceptical about the existence of witches with the supposed power to harm or heal.

Despite this, James would have been aware that, if witches with the power to do harm actually did exist, they could represent a serious threat to both society and the king personally. Having come to the throne as an infant and survived several attempts on both his life and his throne, James had every reason to feel insecure.

In 1590 James married Anne of Denmark On return from Scandinavia to Scotland, the king’s ship was battered by severe storms and it was suggested that the dark arts were being used by his enemies to prevent him returning safely to Scotland. This was the alleged work of the North Berwick witches who confessed, after torture, to acting with the devil against James.

Agnes Sampson was one of those accused of trying to kill James using witchcraft. During her confession she claimed that she attached parts of a corpse to a cat, sailed to sea in a sieve, then put the cat into the sea to create a storm to shipwreck the king.

This direct threat to the king, who the devil reportedly viewed as his chief enemy on earth, seemed to provoke James's interest in witchcraft. James personally questioned many of the accused but remained sceptical about the reality of the deeds they confessed to. This changed when Agnes Sampson said she could prove she was a witch by recounting to James his conversation with his new bride on their wedding night. Agnes must have convinced James as, from this point, he was persuaded of the reality of the threat against him.

The notorious North Berwick witch hunt led to the accusation, arrest and torture of a group of around 60 people. Some of the accused were educated and of high status within the community. Under torture and questioning many confessed and, although the records are incomplete, it is likely that many of the accused were executed, probably by burning.

It is likely that it was at this time that James's interest in the subject led him to write a tract, 'Daemonologie' (published in 1597), in which he described the:

'fearefull aboundinge at this time in this countrie, of these detestable slaves of the Devill, the Witches or enchanters'.

'fearful abundance at this time in this country, of these detestable slaves of the Devil, the witches or enchanters'.

‘Daemonologie’ was intended to convince sceptics of the reality of witchcraft. Written in the form of a dialogue, it sets out an argument demonstrating that the existence of witches can be proven and urges their detection and punishment. Although the Scottish Witchcraft Act had been in force since 1563, no large scale witch hunts took place until the period during which James was writing.

Read this passage from 'Daemonologie' and answer the questions that follow:

'What can be the cause that there are twentie women given to that craft, where ther is one man?

'The reason is easie, for as that sexe is frailer then man is, so is it easier to be intrapped in these grosse snares of the Devill, as was over well proved to be true, by the Serpents deceiving of Eva at the beginning, which makes him the homelier with that sexe sinsine.'

'What can be the cause that there are 20 women given to that craft [witchcraft], where there is one man?

'The reason is easy, for as that sex is frailer than man is, so is it easier to be entrapped in these gross snares of the Devil, as was over well proved to be true, by the Serpent's deceiving of Eve at the beginning, which makes him the more familiar with that sex since that time.'