The three witches in 'Macbeth' 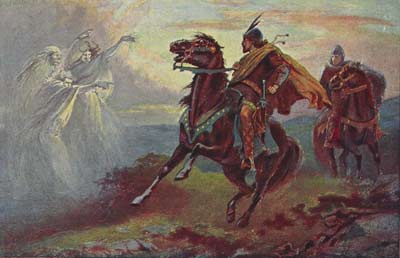 Macbeth and Banquo meet the three witches.
Illustration from 'The Picture Shakespeare: Macbeth', 1901.
[NLS reference: [Am].5/5]

'Nobody would believe such folly now-a-days, except low and ignorant creatures such as those who consult gipsies in order to have their fortunes told'.
— Sir Walter Scott writing in 'Tales of a grandfather' about the three witches in 'Macbeth'.

Written between 1603 and 1607, 'Macbeth' was one of the first plays Shakespeare produced during the reign of the newly crowned King James I of England (James VI of Scotland).

Although James had acceded to the Scottish throne as an infant in 1567, he only became king of England in 1603 after the death of Queen Elizabeth I, who had failed to produce an heir. This union of the crowns ensured that from 1603 the king was simultaneously King James VI of Scotland and King James I of England.

In writing ‘Macbeth’ it is likely that Shakespeare was keen to win the favour of the new king of England. This might explain the inclusion of witches in the play, as James had a great interest in the subject, as shown in his book 'Daemonologie'.

How did Shakespeare's audience view witches and witchcraft?

In Shakespeare's time most people believed in witches, the devil, evil spirits and magic. In both England and Scotland, women (and men) suspected of being witches were arrested and questioned, often after being tortured into providing a confession.  Witches were generally sentenced to be hanged in England. In Scotland they were generally strangled before their corpse was burnt at the stake.

People accused of witchcraft would not usually have made predictions so the witches in Macbeth are unusual. They use their evil magic to trick Macbeth with their half-true predictions.

We do not know what Shakespeare's own attitude towards witchcraft or magic was. He may have wanted them to represent real witches, or evil in human form. Either way, the witches are powerful figures who play a vital role in how the play unravels.

Modern play directors often find it difficult to deal with the witches because most people nowadays do not believe in witchcraft in the same way as Shakespeare's audience would have done. They also want to avoid the cliché of Halloween-style witches on broomsticks. A few directors choose to make them invisible, or even leave them out of the play altogether.

Shakespeare called the witches 'weird sisters', a term that he picked up from the Scottish chronicles narrating the story of the historical Macbeth.

They were a hybrid of the everyday village witches who committed magical harm — though such witches did not tend to make prophecies. Arguably, the attributes of the village witch were bolted on to the 'weird sisters'.

What is the witches' role?

The witches are not characters in the way that Macbeth and Lady Macbeth are. There is hardly anything to distinguish between the three of them. However, they serve several purposes:

In Act IV scene 1 the witches summon the spirits to show to Macbeth. For this they perform a spell, throwing all kinds of disgusting or frightening things into their cauldron. This scene normally follows an interval and it draws the audience back in to the play. It also shows just how foul the witches are.

Suggested activity and questions for discussion

Here are some of the magical ingredients. The difficult words are highlighted in bold and explained below.

Fillet of a fenny snake,
In the cauldron boil and bake:
Eye of newt, and toe of frog,
Wool of bat, and tongue of dog,
Adder's fork, and blind-worm's sting,
Lizard's leg, and howlet's wing

Scale of dragon, tooth of wolf,
Witches' mummy, maw and gulf
Of the ravined salt-sea shark,
Root of hemlock, digged I' the dark;
Liver of blaspheming Jew,
Gall of goat, and slips of yew,
Slivered in the moon's eclipse;
Nose of Turk, and Tartar's lips,
Finger of birth-strangled babe,
Ditch-delivered by a drab,
Make the gruel thick and slab.
Add thereto a tiger's chawdron
For the'ingredience of our cauldron.