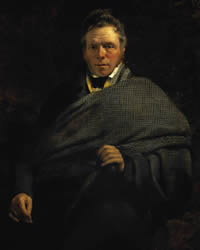 James Hogg was born in Selkirkshire in 1770, the son of a farmer. At the age of 20 in 1790 he found work as a shepherd in the Yarrow valley in Ettrick Forest. When he stayed here, Hogg was able to indulge in his love of reading. It was at this point that he also started to write poems, plays, and songs.

Although Hogg came from a humble peasant background, the cultural traditions among these people were nevertheless very rich. A large number of accused witches shared this peasant background. Hogg himself seemed to be quite proud of this and claimed that several of his ancestors were witches.

His mother, Margaret Laidlaw, also came from a family where witchcraft was not unknown. One of the women in her family had been accused of dabbling in the black arts during the time of John Knox, the 16th century Scottish Protestant reformer. 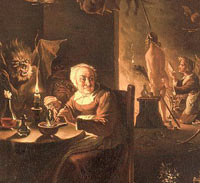 17th-century German painting
of a witch and demons.

After the Reformation there was an inherent suspicion and mistrust of Catholicism across the country. Its rites and rituals were often stigmatised as being witchcraft. In 'The witches of Traquair' for example, Hogg sets the story at a time when 'Popery was on its last legs' and many of the 'meaner sort' turned to witchcraft.

As Calvinism became entrenched in society, behaviour such as being able to heal the sick or taking part in ancient folk customs came to be viewed with suspicion.

As the Enlightenment movement in the 18th century began to discredit superstitious beliefs, in many isolated country areas like Ettrick and Selkirkshire harrassment and accusation of suspected witches went on quite late into the 18th century. Many people living in Ettrick Forest at this time still held a belief in the powers of witchcraft.

At the time Hogg sets 'The hunt of Eildon' and 'The witches of Traquair', accused witches would have suffered the death penalty. For example, just their alleged ability to shape-shift — to change themselves into animals and change others as well — would have been enough to condemn them.

Once an accusation of witchcraft had been made against a woman there was little she could do to defend herself.

In these circumstances some accused women, if they escaped the death penalty, did in fact attempt to practise witchcraft. Perhaps these women thought that if everyone believed they had powers then they might as well use this to their advantage.

Some of these women probably did believe in the powers that had been given to them. Others remained curiously rational and exploited their neighbours fears for reasons of their own.

'The witches of Traquair'

'The witches of Traquair' is a tale of how witches offer to deliver a young man's sweetheart to him if he will sign a pact with the devil. Colin, the weak-willed hero suffers because his religious faith is not strong enough for him to withstand the temptation offered by the witches.

Hogg suggests that the danger Colin was in was greater because he did not have the benefit of the 'true' religion:

'His father was a sincere adherent of the Reformers, and a good Christian; but poor Colin was born at Taniel-Burn, in the midst of Papists and witches' and the nearest relation he had, a maternal aunt, was the leading witch of the neighbourhood. Consequently, Colin was nurtured in sin, and inured to inquity ...'

This story is just one example of the theme of witchcraft in Hogg's work. Many of his other tales have elements of the supernatural and witches.

You can find more books by and about James Hogg by browsing the Library collections. Type 'James Hogg' in the search box above and select 'catalogues and resources'.