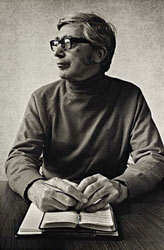 Morgan graduated the following year with a First Class honours degree in English language and literature. He turned down a scholarship to Oxford and later became a lecturer at Glasgow University. Morgan’s first poetry collections were published in the 1950s and he continued to produce a wide range of work until his death

In 2004, Morgan was appointed the Scots Makar by the Scottish Parliament. He died on 19 August 2010 at the age of 90 in his beloved home city of Glasgow.

Janet Horne was the last person in Britain to be tried and executed for witchcraft. In 1727 she and her daughter were arrested and jailed in Dornoch.

Janet's daughter suffered from a deformity in her hands and feet. Neighbours gossiped that she looked as though she had hooves and Janet was accused of turning her daughter into a pony to transport her around the countryside to carry out her witchcraft. It was believed that the hooves were proof of their witchcraft and that they remained in place of hands and feet because Janet had failed to completely return her daughter from pony to human form.

Dornoch in the 18th century.

Janet's legal options were very limited and her trial was rushed through. Captain David Ross, the sheriff-depute of Sutherland, found both Janet and her daughter guilty. He ordered that they should be burned to death the following day.

Her daughter managed to escape, but Janet, perhaps showing signs of what would be recognised today as dementia, was clearly confused by events. She was tarred and feathered and paraded through Dornoch in a barrel. When she arrived at her execution place, Janet is said to have smiled and warmed herself at the very fire which was about to consume her.

The stone that marks the site of Janet Horne's burning can still be seen in Littletown, although the date on the stone — 1722 — is wrong, it should read 1727. Nine years after her death the Witchcraft Acts were repealed in Scotland and England and it became unlawful to execute anyone for alleged witchcraft. 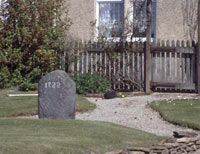 Century of enlightenment
Still thirled to torment
Thumbscrews and judgement

Janet made a pony
Of her daughter, says the story
Rode her for Satan's glory

You can find related books, articles and information about Edwin Morgan at the National Library of Scotland. In the search box above, type in 'Edwin Morgan' and select 'catalogues and resources'.

You can also find more information on the Edwin Morgan Archive at the Scottish Poetry Library website.

Edwin Morgan’s manuscript papers are held at the University of Glasgow Special Collections.

'Janet Horne' by Edwin Morgan is reproduced here by permission of Carcanet Press.