Dr Myles Cooper and Dr Charles Inglis were two prominent loyalists in New York. They retained their allegiance to King George III and the British Government during the American revolutionary period and War of Independence (1775-1783).

The war broke out in 1775 when British troops clashed with American militia a Lexington and Concord in Massachusetts. It lasted until 1783 when the British Government signed the Treaty of Paris, formally accepting and recognising an independent United States of America. 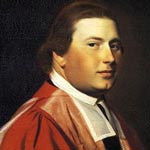 Born in Lancashire and educated at Queen's College, Oxford University, Cooper was ordained in 1761. By 1762 Cooper had attracted the esteem of several prominent clergymen including Dr Samuel Johnson. He was recommended for service in the American colonies. Cooper went to King's College, now Columbia University in New York, where he became president and professor of moral philosophy.

Founded in 1754 by Royal Charter of King George II, King's College was a prominent institution with strong Anglican foundations.

Cooper re-organised King's College following the principles of Oxford University. At the time of the Revolution the college harboured a tight-knit community of Anglicans, and many professors, alumni, and students became loyalists during this time. 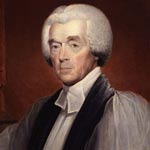 Inglis was born in Ireland in 1734. At the age of about 20 he emigrated to America to teach at a school in Pennsylvania. In 1758 he went to England to be ordained as an Anglican priest. On returning to America, Inglis worked in Delaware as a missionary for the Society for the Propagation of the Gospel. The society was designed to promote Anglicanism throughout the colonies.

In 1777, Inglis was appointed rector of Trinity Church in New York City and became an important minister in the colonies. After the British were defeated in 1783, Inglis returned to England. In 1787, King George III created the diocese of Nova Scotia and appointed Inglis as its first bishop.

Find out more about Cooper and Inglis in this video narrated by Stirling University PhD candidate Christopher Minty.

You can also read a transcript of this video.

During the revolutionary period there was what has become known as a 'pamphlet war'. Political and religious pamphlets were published by patriots and loyalists and circulated between the two groups. These pamphlets expressed the ideas, concerns, and arguments of each side. While some protested against the tyrannical nature of the British Parliament, others advocated fidelity to the divinely ordained king. 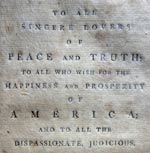 Anglicans like Inglis and Cooper viewed the American patriots' rebellion against the British monarchy and government as unnatural.

Inglis wrote a series of pamphlets with other Anglican ministers against the Revolutionaries. As president of a prominent Anglican institution and a leading Anglican clergyman, many loyalist pamphlets were given to Cooper to read and edit.

In 1775 Cooper anonymously published a poem titled 'The patriots of North-America, a sketch'. To Cooper, colonists were being led astray by proud and ignorant fanatics, or, as he calls them in the poem:

'…this vagrant Crew
Whose wretched Jargon, crude and new,
Whose Impudence and Lies delude
The harmless, ign'rant Multitude…'

The poem is a stark example of the hardened political divide in 1775. Cooper became synonymous with the loyalist pamphlets and was one of the most hated loyalists in New York.

There was increasing violence towards loyalists with incidents of tarring and feathering. This was a humiliating and painful assault in which people would have a bucket of boiling tar poured on them and then get covered in feathers. The unfortunate targets would be paraded around the town.

While Cooper's high position insulated him from the worst of such of attacks he would still have been subjected to verbal abuse. Other loyalists were not so lucky and were publicly ostracised or worse.

As tensions escalated, Cooper decided to leave New York. As a high-profile Anglican, he decided it would be best for his and his friends' safety if he was to leave the colonies. He departed on a ship bound for England in May 1775, not long after the American Revolution had begun. 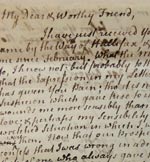 Cooper arrived back in England and settled in London before returning to Oxford, his former university. However, he was still eager to receive news and information of what was happening in New York. He wanted to know about King's College specially, an institution he loved dearly.

Throughout the Revolution, Cooper corresponded regularly with friends, such as Charles Inglis, and other notable loyalists, such as Attorney-General John Tabor Kempe. This correspondence offers a unique glimpse of New York during the Revolution — the turmoil, increasing poverty and general state of affairs. Inglis' evocative letters to Cooper also offer a fascinating insight into the minds of a loyalist population who was struggling to accept the severity of their situation.

Hope for a British victory

Inglis, like many loyalists in New York and the other colonies, maintained optimism for a British victory. In his letters to Cooper, Inglis often wrote as if victory was within reach.

It is clear that loyalists questioned the ability of the Americans from their correspondence. General George Washington and the American military forces were undermined. Benjamin Franklin's mission to France to secure French assistance in the war was dismissed. This is in stark comparison to the loyalists' belief in the British generals who they saw as being able to 'get the job done'.

The loyalists thought they had to win a single decisive battle, just one significant victory against Washington's army to defeat the Revolutionaries once and for all. With such a defeat of the revolutionary forces, the loyalists believed the colonists would accept what they saw as the natural order and go back to life under the rule of George III. This never happened. In addition, to the dismay of Inglis, Cooper, and other loyalists, Benjamin Franklin's mission was successful and forced the British Army to divide her forces to defend her other colonies.

End of the war

At the end of the war, some 60,000 loyalists left the fledgling United States. On 'Evacuation Day', 25 November 1783, the last British troops left New York. This also marked the final exodus of the remaining loyalists. They left the United States and migrated to such places as:

Inglis chose to settle in Canada, while Cooper had settled in Edinburgh. Cooper remained here until his death during a luncheon with friends on 20 May 1785.

In 1784 the British Government launched a compensation scheme to repay loyalists who could prove their allegiance to the British Crown.

The process for applying for compensation turned out to be very long and complicated. Only about 3,000 claims were submitted. This reflected only a very small proportion of how many loyalists there actually were, estimated to number about 500,000. In the end, not all claims were awarded and almost all successful applications were awarded only a fraction of what had been originally claimed.