The history of working people in Scotland 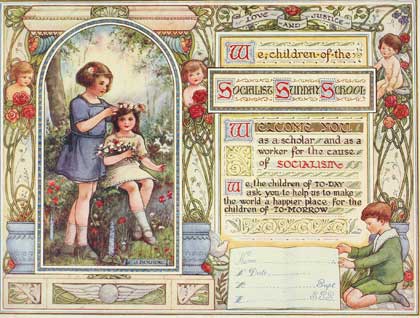 In Scotland, the Socialist Sunday School movement began in Glasgow in the 1890s, but soon spread to other parts of the country. The aim was to promote and share socialist values, and to offer an alternative to the teaching of Christian Sunday schools and state schools. The movement flourished until the 1930s, and was closely linked with the Independent Labour Party.

Unlike the church Sunday schools, the Socialist Sunday School meetings were attended by people of all ages. The movement offered secular alternatives to christenings, marriage, and funerals.

The key values that underpinned the Socialist Sunday Schools were:

In promoting these principles, they ensured that children would become capable and responsible thinkers.

Ethical and moral lessons were taught through stories and lessons, including myths, legends, and traditional tales. There were also 10 socialist commandments which children learned by heart. You can find out more about these commandments on the Red Clydeside website.

In many respects, the Socialist Sunday School meetings were run along similar lines to church Sunday schools and services. They had a set order, and included lessons, recitation of texts, a collection which was given to a chosen charity or fund, and hymns. The movement produced its own hymn book, and one of the most popular hymns was 'England Arise' written by Edward Carpenter.

The movement also organised a range of social activities for members, including parties, outings, picnics, and fêtes.

The image above might still be in copyright. We have made every effort to trace the copyright holders but to no avail. Please contact us if you have any relevant information.

Find out more about labour history at the Library

We have the leading collection of research material relating to Scottish labour and trade union history.

Visit the Moving Image Archive catalogue to find films relating to Scottish industry from fishing and tweed-making to mining and agriculture.