By living we learn

Patrick Geddes was a man of diverse interests and talents. Today he is probably best known as a town planner. However, he has also been described as a biologist, sociologist, conservationist, educationist, and ecologist.

Geddes did much to improve the living conditions in his local environment and was also a figure of international importance. He travelled widely and corresponded with key thinkers and writers of the time such as Charles Darwin, Mahatma Gandhi, and Nobel laureate, Rabindranath Tagore.

Above all, his aim was 'to see life whole', and to achieve a better understanding of human beings in their natural, built, and social environments. His ideas and concerns about the environment, education, and conservation are still as relevant today as they were in his own time.

You can also read the transcript of this video.

Who was Patrick Geddes?

Patrick Geddes was born in Ballater, Aberdeenshire, on 2 October 1854. He spent his childhood in Perthshire and attended Perth Academy. He had a lifelong contempt for examinations and never took a university degree. After a period of private study, he chose botany as his subject but left Edinburgh University after one week. He went on to study botany and zoology with individual teachers and mentors in London and Paris. It was in Paris that he became influenced by the work of the French sociologist Le Play.

Geddes became a demonstrator in practical physiology at University College London, and in 1879 he travelled to Mexico to collect biological specimens. While there, he suffered temporary blindness and this left him with permanently weakened eyesight. It was during this period that he discovered his 'thinking machines' — a visual method of presenting and connecting facts and ideas to aid thought.

Geddes spent most of his life outside normal academic channels. He seemed to have difficulties expressing his ideas in writing. However, he had a gift for mobilising others and for putting his ideas into practice.

In 1880, Patrick Geddes was appointed Assistant in Practical Botany at Edinburgh University and was based at the Royal Botanic Garden. He settled in Edinburgh with his wife, Anna. Over the next 20 years he initiated a number of social experiments designed to improve housing and living conditions in the Old Town.

By the mid 19th century, many of Edinburgh's most prosperous citizens had moved to the New Town or the newly-built suburbs to the south and west of the city. The Old Town was in desperate need of improvement, with poor housing and sanitation.

Geddes believed that, in order to understand and improve a community, one had to be a part of it. In a bold move, he transferred his family to James Court, a near-slum off the Lawnmarket at the top of the Royal Mile. He started by improving the building in which he lived, but he was soon inspiring and mobilising his neighbours into communal action.

In 1884, Geddes established the Environment Society (later the Edinburgh Social Union) to encourage local residents to survey, plan, and improve the local environment.

Geddes wanted to encourage a mixture of people from different backgrounds and professions to settle in the Old Town to create a mixed, vibrant community. He founded University Hall, the first Hall of Residence in Edinburgh. The hall was set up in renovated properties around the Lawnmarket, including one in Riddle's Court (soon to be transformed into the Patrick Geddes Centre for Learning and Conservation). 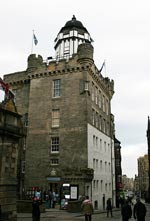 Another project involved transforming Short's Observatory on Castlehill into the 'world's first sociological laboratory'. The Outlook Tower, now the Camera Obscura, encouraged people to take a holistic approach to learning about the environment. Successive floors demonstrated how by starting at a local level, one can begin to make connections with the wider world.

Geddes' wife Anna worked alongside him throughout their married life. She was to provide the stable home-life and support that enabled Geddes to carry out many of his projects.

'By leaves we live'

'How many people think twice about a leaf? Yet the leaf is the chief product and phenomenon of Life: this is a green world, with animals comparatively few and small, and all dependent upon the leaves.'

This quote from Geddes shows that gardens were an important feature of his social experiments and town planning initiatives. He believed that gardens and green spaces were essential for:

In Edinburgh, as well as other cities, Geddes made use of disused and derelict spaces, however small, to create green spaces and gardens for the local inhabitants to tend and enjoy.

You can find out more about the Geddes gardens on the Green Yonder Tours website.

Patrick Geddes believed that education was a catalyst for social change and active citizenship. He explored the ways in which people learn most effectively. He developed an educational philosophy which emphasised the combination of 'hand, heart, and head', in that order of priority.

He believed learning should engage the emotions, and include physical activity. This included 'learning by doing', as well as more traditional methods of learning from books and lectures.

Geddes also promoted an interdisciplinary approach to learning, highlighting the useful connections and synergies between different subject areas and disciplines.

From 1883 to 1903, he organised the Summer Meetings of Art and Science which attracted scholars from Britain, Europe, and America. The meetings were initially designed to help school teachers to teach the natural sciences, and a significant proportion of the participants were women. Over time, the meetings extended over a longer period of time, covered a greater range of subjects, and became more international in scope.

The summer meetings attracted an impressive range of speakers, including John Duncan, the Scottish artist, and William James, the American psychologist and philosopher. Students could choose from a full programme of activities including talks, excursions and field trips, and evening concerts and cultural events.

Between the 1890s and 1913, Geddes created and toured the widely acclaimed 'Cities Exhibition' in Edinburgh, London, Dublin, Belfast and Ghent. The exhibition set out his theories about town planning, and helped to make his name in this field.

As war broke out in 1914, Geddes embarked for India to show his 'Cities Exhibition' in Madras. Sadly, the ship 'Clan Grant' was sunk en route for India, and the exhibition was lost. Geddes' friends rallied round and helped to gather more material for display. The exhibition opened only two weeks late in January 1915.

The National Library of Scotland has recently acquired some archive material relating to the 'Cities Exhibition' including photographs and sketches showing the development of Edinburgh.

Geddes' ideas about town planning and sociology extended to other countries and continents.

Geddes lived in India from 1917 to 1924, making detailed and careful suggestions for the re-planning of a considerable number of Indian cities. He also held the Chair of Sociology and Civics at Bombay University from 1919 to 1924.

In 1919, Geddes was also commissioned to suggest improvements to the city of Jerusalem and to plan the new Hebrew University there, and in 1920 he went to Ceylon to report on the re-planning of Colombo.

After Geddes' health began to deteriorate in 1924, he was advised to leave India and he settled instead in Montpelier in the South of France. He began to create the Collège des Ecossais in Montpellier. This was his 'long dreamed of' project to 'refound' the famous Scots College of Paris.

Patrick Geddes accepted a knighthood in 1931. He died in Montpellier in the spring of 1932.