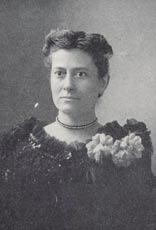 Williamina was born in Dundee, the daughter of a carver and gilder with premises in the Nethergate. She left school when she was 14 and became a pupil-teacher.

She then got married and she and her husband emigrated to the USA in 1878. Unfortunately, her husband left her when she was pregnant and she was forced to support herself and her child. She found work as a maid at the home of Edward Pickering, Director of the Harvard College Observatory.

In 1881 Pickering employed her at the Observatory itself as a fulltime copyist and 'computer' — which was the word used then for someone who analysed information.

At that time Pickering had just embarked on an extensive program of celestial photography. Williamina's job involved examining spectra — the breakdown of light from stars — on photographic plates. 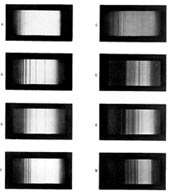 Spectra from stars as
seen in the 19th century.

Pickering's technique involved placing a prism in front of the telescope lens to capture the spectral image from each star. When we think of a spectrum nowadays, we imagine a display of coloured light in bands, such as you see in a rainbow.

In Williamina's day, the spectra on photographic plates would not be coloured but appear in light or dark bands like those in the image on the left.

Each star would have its own distinctive spectrum. Williamina would have to inspect these and note anything unusual about them.

Astronomers now use a spectrograph to break up the light coming from a star. It is more sophisticated than using a prism, but produces similar effects. Each colour represents different wavelengths, and lines on the spectrum indicate chemical composition. In this way, astronomers are able to gain a lot of information on the properties of any star including its temperature.

In this way, Williamina was able to measure spectra even from faint and distant stars. Using a magnifying glass, she meticulously inspected the photographic plates. She made notes of her observations in tabular form, where variable stars were described in terms of the brightness and intensity of different areas of their spectra. At the time of her death she had handled over 200,000 fragile plates.

There is a memorial plaque in Dundee commemorating Williamina's achievements.