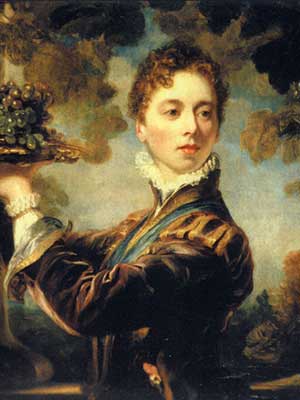 Lady Caroline Lamb is remembered chiefly as Lord Byron's lover and for her description of the poet as 'mad, bad and dangerous to know'

She was also a novelist, however. She is therefore represented in the John Murray Archive both as a Murray author and as a key figure in the life of Byron.

Lamb was an eccentric, witty and well-read member of the aristocracy who fell obsessively in love with Byron.

After Byron ended their relationship, Lamb found it very difficult to accept it was over and continued to fixate upon him. John Murray II often acted as a middle man, dealing with her obsessive and eccentric behaviour.

Lamb published three anonymous novels. The first was 'Glenarvon' (1816), a semi-biographical novel that offended many with its thinly-veiled portraits of her family and social circle, including Byron.

In 1822 she published 'Graham Hamilton' and the following year Murray published her third and final novel – in 'Ada Reis, a tale'.

Unlike 'Glenarvon', 'Adam Reis' was not a bestseller. By January 1827 about 900 copies had been sold and it was not reprinted.