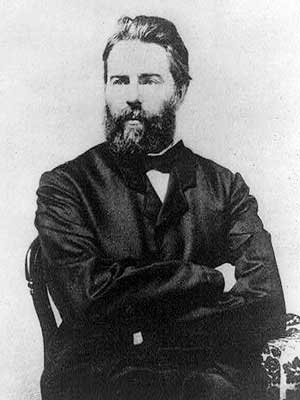 American Herman Melville travelled on whaling boats in the South Seas of the Pacific Ocean between 1841 and 1844.

He had many adventures during these journeys, including deserting his ship and living among the natives.

Melville's first popular account of these travels was published in America as 'Typee' and in Britain as 'A Narrative of a Four Months Residence among the Natives of a Valley of the Marquesas Islands; or, a Peep at Polynesian Life' in 1846.

It was an immediately success. All though based on actual experiences, many readers did not at first believe that it was a true story.

'A Narrative of a Four Months Residence'

'Typee' had been rejected by one publisher on the grounds that it was too fantastic to be true. Herman's brother Gansevoort, while in London, had persuaded John Murray to publish it. As the firm under John Murray III had grown a reputation for travel writing, Murray demanded further factual information to prove the story.

Murray also published Melville's 'A Narrative of a Four Months Residence' as part of his 'Home and Colonial Library' (volumes 30 and 31). It was so successful that it was followed by the sequels 'Omoo' (1847) and 'Mardi' (1849). However, these were not as popular as the original work.