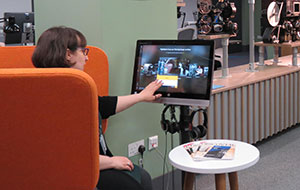 The Moving Image Archive is located at the National Library at Kelvin Hall in Glasgow.

There is no need to join the Library to visit us at Kelvin Hall, but to access some Moving Image Archive services please contact us in advance. 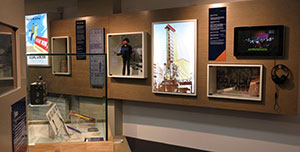 Film and cinema artefacts
in the discovery area

As well as a 12-screen video wall playing highlights from the archive, the discovery area has a wall devoted to the history of film-making and cinema going in Scotland. Cinema posters, vintage cameras and other artefacts from the Moving Image Archive are displayed together.

You can examine film reels and see the Oscar statue won by the film 'Seawards the Great Ships'.

A varied events programme is hosted in the space including screenings of highlights from the Archive in the CINE[THESIA] film club. 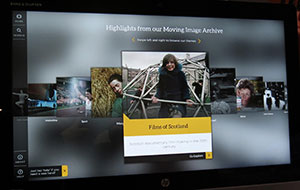 Themed video packages on
one of the interactive touch screens

Our interactive touch screens have a range of themed video packages for you to view. Specially compiled by community groups, external experts and our own curators, these packages bring together some of the best films from the archive. Packages include sound recordings as well as moving images.

A popular themed video package is all about Glasgow. This features films about Glasgow from 1902 to 1985 and shows how the city has changed through the decades. 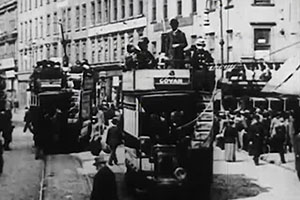 'Glasgow trams' is one of the films included in the Glasgow package. It was made by renowned film company Mitchell and Kenyon. This film gives a fascinating picture of transport in the city at the start of the 20th-century and can be viewed via the online catalogue. 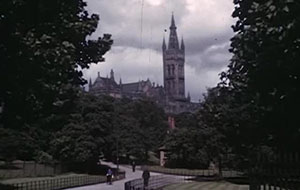 'Glasgow' is another early colour film from the package. Produced in the 1950s it offers a nostalgic perspective of Glasgow. Many of Glasgow's famous landmarks are featured in this short film.

Our 'Music Hall and Variety' package is also popular as it features sound recordings as well as films. Scottish islands and coasts, sport, fashion and transport are just some of the other themed packages available.

Themes change throughout the year with new footage being added continuously. If you have a specific area of film interest and would like to contribute to these video packages please contact us. 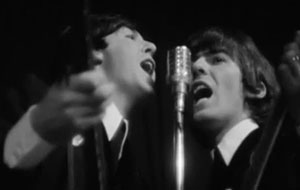 There are even more films available to view onsite at Kelvin Hall. Searching the catalogue using our computers, you can access footage which is unavailable remotely, including vintage films from Grampian Television and Scottish Television. 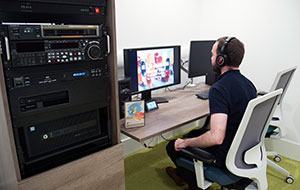 One of the viewing rooms in use

We offer cutting-edge facilities for viewing films in a range of analogue and digital formats, to support broadcast work and film research.

The rooms are various sizes to accommodate different groups, and have multi-screens for professional viewing of a range of formats including Blu-ray, DVD, VHS and Digibeta. 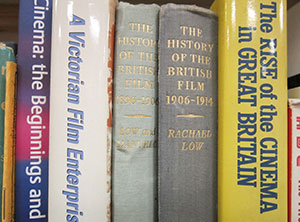 Reference books from the collection

In addition to thousands of films, the Moving Image Archive also has a written archives and reference collection.