These examples relate to two titles restored by the National Library of Scotland using Diamant software. 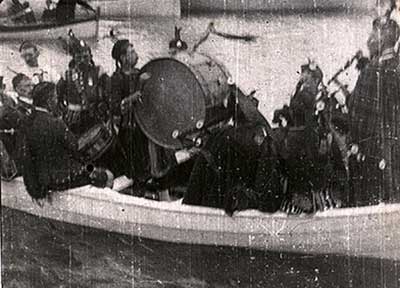 In 2003 the Moving Image Archive was approached the archivist at Mount Stuart — the seat of the Crichton-Stuarts of Bute — to say that a film had been found in one of the attic stores.

It was believed to be of the wedding of the 4th Marquis of Bute in 1905.

The film was 35mm positive — on nitrate stock — it was in a particularly parlous state. Nitrate film stock is short-lived, prone to chemical deterioration. As it degrades it can become very unstable — spontaneously combustible — gives off a harmful odour, and eventually crumbles to an explosive dust.

This particular reel had started to decompose and was badly shrunk and extremely brittle. It had dried out to a state that we had never encountered previously — so brittle that the emulsion would shatter like glass if anyone attempted to unravel the reel. 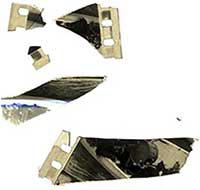 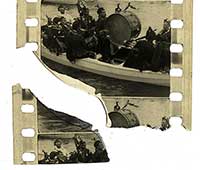 This original film was sent to the specialist film laboratory for special reconditioning. This was to allow the film to be duplicated on a lab optical printer and on to negative safety film stock.

The new 35mm duplicate negative was then transferred to broadcast quality digital videotape.

The Library uses a digital restoration suite with powerful computer workstations and render farm to digitally repair damaged and degraded films.  We use purpose-designed digital software called Diamant for the restoration of moving images.

The Bute film was the first title that we set out to conserve using this new technology. We had gone as far as we could with photo chemical processes; the remainder of the conservation of this film would require the application of digital techniques. This was a learning curve for our conservation team.

The introduction of this technology placed the Library at the forefront of professional practice in the UK and the process of working on the Bute film has enabled the Moving Image Archive Preservation Officer to construct the ethical and technical guidelines that we have now introduced to our preservation work.

Wear and tear and the ageing process had left the Bute film with a catalogue of physical characteristics that were a barrier to viewing.

The duplicated image was juddering and shaky due to the extreme shrinkage of the base. Nitrate decomposition damage was visible on the duplicate image, dust, scratches and dirt marks were present throughout and the end of the reel was damaged significantly which was broken into many small pieces.

The whole film consists of 2,690 frames and was restored keeping digital restoration work to a minimum. Where parts of the image were missing or obscured by nitrate decomposition, a technique called interpolation was used — where the computer uses the information from the frames before and after to reconstruct the missing area. Only the missing area was restored using this technique: the rest of image in the frame is original.

Only damage which was visibly objectionable was repaired. Some small light scratches and dust specks remain. Removing these would require manual retouching frame by frame, which would take months, if not years, to complete.

We will always have an unaltered film master safe in the vaults and an unrestored digital version which can be used for research if required.

The restoration of the 'Queen Mary' film 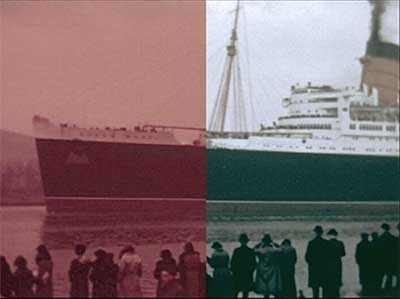 Composite image showing colour differences before and
after restoration work.

The 'Queen Mary' film was shot in 1936 on early Kodachrome A stock. This was the first amateur colour reversal 16mm movie film.

The early film stock had problems with colour instability with the dyes fading prematurely.

Colour is reproduced using three dye layers — yellow, magenta and cyan. Over the years the cyan layer faded at a faster rate than yellow and magenta dyes, creating a red or magenta cast when viewed. Kodak quickly solved this fading problem, and within a year the next version of Kodachrome used very stable colour dyes.

The film was first inspected on a winding bench and any damage that was found was carefully repaired. The film's colour had faded badly and had a very strong red colour cast. The film was sent to a lab in London, and each frame was scanned at a very high resolution (4K).

The film was scanned using a wet gate process. The wet gate technique helps to conceal scratches present on the base side of the film. During the scanning process the cyan colour layer, which had badly faded, was improved: this helped to remove the overall red colour cast.

The scanned images were stored on a hard drive and sent back to the archive. This hard drive data was then transferred onto a powerful workstation computer. Specialist digital restoration software (Diamant, Combustion and Photoshop) was used to remove scratches or image damage that was not removed during the wet gate scanning process. 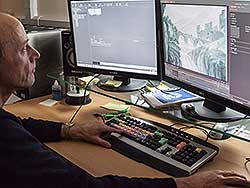 Diamant software in use.

The Diamant dust removal tool was used to remove dirt and dust. On completion each frame was compared to the original frame to make sure that the software removed only the unwanted dust. Any parts of the image wrongly identified by the software needed to be protected using a protection mask. This mask is drawn around the area and the dust removal process run again.

Digital restoration of these two films was a very time consuming process. The computer equipment and software available at the time meant that the high-resolution images took a great deal of time to process (render) in the computer.

Even with the increased processing power, render times varied from a few minutes to many hours. The render time depended on the type of restoration tool that was used and the number of film frames that were restored. Restoring both these titles was therefore a very slow process.

In the 10 years since the digital restoration of the Bute film and the Queen Mary film, technology has developed greatly.

During this period, the computers had become old and slow and the software could no longer be upgraded, as it would not run on the slower machines. Higher specification computers were needed.

In 2014, with funding from the Mickel Trust, the Library was able to buy new high-specification equipment to provide highly advanced digital restoration of moving images.

The new system provides automatic, semi-automatic and interactive film restoration, cleaning and repair. This means that more complex restoration work can be carried out more efficiently, and processing times are much quicker.

Where a 30-minute film previously may have taken many hours to process, we can now undertake an automatic dust removal process in 20 minutes.

As part of our new workflows, we aim to undertake an automatic dust removal process for all films scanned in-house. This provides a much clearer image — nearer to how the original film would have looked.