From their accession until 2005, these were the largest books in the National Library of Scotland, with some of the most splendid illustrations.

In the spring of 1797, with a direct assault against Britain out of the question, Napoleon Bonaparte suggested threatening Britain's rich commerce with India by invading Egypt.

Having long been fascinated by the Orient and dreaming of emulating Alexander the Great, this seemed a perfect opportunity for him to begin a glorious venture that would be fairly economical with French resources.

In reality, the expedition was a disaster. Naval defeats by the British in the Mediterranean left the expedition cut off from France. In addition, the French had little success in winning over the Sheiks and Imams, while climate and disease increasingly took their toll on the homesick French soldiers. Facing the threat of a second Coalition, Napoleon abandoned his army and returned to France.

A unique feature of the expedition, which set sail on 19 May 1798, was the large number and high calibre of the attached civilians. In addition to assisting in the formulation of practical measures for the rule of Egypt, the 167 savants, led by Baron Dominique Vivant Denon (1747-1825), accompanied the army to every corner of the country.

On these journeys they studied every aspect of the life of Egypt and its peoples. Their studies of the great monuments of ancient Egypt and the discovery of the Rosetta Stone in 1799 paved the way for the science of Egpytology.

Initially, the work was published in instalments between 1809 and 1829. Four hundred copper engravers worked for 20 years on the 'Description'. They gathered information sufficient to produce what was the largest publication in the world at that time. Most of Egypt's heritage known at the time was systematically catalogued, mapped, and meticulously drawn, from the obelisks to the vast statues on the banks of the Nile, as well as the country's flora and fauna.

After publication of the 'Description', the 19th-century Egyptian revival began in earnest. The accuracy of the archaeology described allowed for the serious scientific study of Egypt.

Egyptomania was at a level not to be equalled until Howard Carter's (1874-1939) discovery of the tomb of Tutankhamun in 1922.

Egyptian motifs appeared in architecture, art and furnishings ranging from the salons of Paris to William Henry Playfair's sphinxes on the Royal Scottish Academy (1822-26) or Alan Stevenson's lighthouse at the tip of the remote Ardnamurchan peninsula (1849).

Egyptology in the Advocates Library

Despite the fact that Sir John Clerk was of the opinion that the Faculty were 'no great lovers of antiquities of any kind, and far less Egyptian', they did show some early interest in the subject. Alexander Gordon had published a series of engravings after his own drawings of miscellaneous Egyptian antiquities in various English collections and these were purchased in 1735 and 1736.

In 1748 the Faculty obtained its very own piece of ancient Egypt in the shape of a mummy. This was at the time the only complete mummy in Scotland and something of a status symbol.

In addition to these unusual purchases, the Faculty had been building up a fine collection of printed books relating to classical art, architecture and archaeology for almost 150 years when in 1831 the 'Description' was purchased.

Unfortunately the Faculty's financial difficulties in the 1830s meant that the 'Description' was one of the last great purchases of that era. Due to the size of the volumes (to this day the volumes of plates, at over a metre tall, remain the largest in the Library) and the impracticality of storing them on standard shelving, a special case was constructed to house them.

An extract from the minutes of the curators dated 15 June 1831 describes the acquisition process:

'Present Mr Walker, Mr Thomson.
The curators having considered a proposal to purchase the great national work on Egypt, prepa[red] under the authority of the French Government, which was offered by Mr Hart Bookseller at 120 Guineas, they remitted to Mr Tytler, and Dr Irving to ascertain that the work is complete, and, on that being ascertained, authorise Dr Irving to conclude the bargain at the foresaid price or a lower price if possible.' 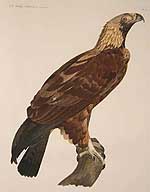 The Advocates Library did indeed purchase a fine set of the 'Description' in the format now preferred by collectors: nine volumes of text (originally published in instalments) and 10 elephant and three double elephant folios of plates. The copy is particularly fine in that the 14 bird plates in the Natural History section have been hand-coloured.

All these books can be consulted in the Library's Special Collections Reading Room [NLS shelfmark: Egypte].