The National Library of Scotland holds well over 3,000 printed works of Gaelic interest, including books written in Gaelic and other Celtic languages, as well as books about the Gaels, their language, literature, culture and history. Many of the items are dispersed throughout the collections. However, the richness of the Library's holdings of Gaelic publications has been much enhanced over the years by the addition of a number of important special collections of Gaelic and Gaelic-related material. 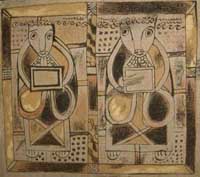 From the Ossian Collection:
Facsimile from
the Book of Deer

Map of the Kingdom of
Connor

The Ossian Collection, originally assembled by J Norman Methven of Perth, consists of 327 volumes. It comprises different editions and translations of James MacPherson's epic poem 'Ossian', some of them with a Map of the Kingdom of Connor, as well as secondary material relating to Ossianic poetry and the Ossian contoversy.

The Blair Collection has more than 500 Gaelic titles, mostly on religious and literary topics; there is also material dealing with other Celtic languages and societies. The collection was created towards the end of the 19th century by Lady Evelyn Stewart Murray.

The Matheson Collection has 170 volumes relating to Gaelic matters; these are mainly philological works in the Celtic and some non-Celtic languages. They include a number of books that were extensively annotated by Angus Matheson, the first professor of Celtic in the University of Glasgow, who had assembled the collection.

The Oban Cathedral Collection includes 57 Gaelic items dating from the 18th to the 20th century.

The first secular book in Gaelic

Item from the Hew
Morrison Collection

Leabhar —'A Galick
and English
vocabulary'

The Hew Morrison Collection consists of 320 volumes and 30 pamphlets of literary and religious works in Scottish Gaelic selected from the personal library of Hew Morrison, the first City Librarian of Edinburgh. A notable item in this collection is a copy of the very rare first edition of John Bunyan's 'The Pilgrim's Progress' in Gaelic, 'Cuairt an oilthirich, no, Turus a Chriosduidh', published in Edinburgh in 1812. Another interesting item is the first non-religious book printed in Gaelic: 'A Galick and English Vocabulary' with an appendix of the terms of divinity in the said language. Written for the use of the charity-schools, founded and endued in the Highlands of Scotland of 1741, compiled by the Jacobite poet Alasdair MacMhaighstir Alasdair (circa 1695-1770), whose name is sometimes given in the Anglicised form Alexander Macdonald. It is worth noting that since the publication of the first book in Gaelic in 1567, all the Gaelic output of the printing presses was exclusively of a religious nature for nearly 200 years.

Another copy of 'A Galick and English Vocabulary' belongs to the pre-eminent among the Gaelic special collections, the J F Campbell Collection. John Francis Campbell of Islay's collection of 610 books is rich in Highland folklore, Ossianic literature and other Celtic subjects. Many of the volumes are annotated in Campbell's own hand.

The second book
printed in Gaelic

The oldest printed Gaelic book held by the Library is a translation of John Calvin's 'Catéchisme de l'Eglise de Genève'. The Gaelic version, 'Adtimchiol an chreidimh comhaghalluidhedar an maighiser, agas an leanamh' was produced in 1631 by the Edinburgh printer John Wreittoun. The Library holds the only known copy of this, the second work ever printed in Gaelic. It is worth stating that by 1631 nearly 70 years had elapsed since the printing of the first book in Gaelic.

The Library does not hold a copy of the first book printed in Gaelic, Bishop John Carswell's translation into Gaelic of the Book of Common Order or 'Knox's Liturgy', originally published in 1560: only three copies (all of them imperfect) of 'Foirm na nurrnuidheadh' of 1567 are known to exist.

Among the many outstanding items is also the only known copy of a Gaelic emigration poster inviting prospective emigrants to Ohio. The poster was published in Stirling in 1822.

You can find details of Gaelic items in the Library's collections using Library Search. The Library holds six Gaelic books printed before 1701, 212 printed between 1701 and 1800, 891 printed between 1801 and 1900, and 2,048 printed after 1900. With regard to rare books, the English Short-Title Catalogue (ESTC) lists 57 books at NLS with the language code Scottish Gaelic, 14 with Irish and four with Manx.

Finding aids for printed books in Gaelic include the 'Scottish Gaelic Union Catalogue: A List of Books Printed in Scottish Gaelic from 1567-1973'. It lists a total of 3,038 titles in Scottish Gaelic published between 1567 and 1973 which are held in national, academic and public libraries in Great Britain. Gaelic books held in private collections or abroad are not listed. The union catalogue has alphabetic author entries with a list of holding libraries after each item.